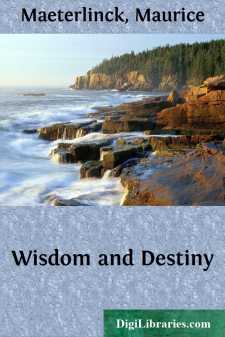 This essay on Wisdom and Destiny was to have been a thing of some twenty pages, the work of a fortnight; but the idea took root, others flocked to it, and the volume has occupied M. Maeterlinck continuously for more than two years. It has much essential kinship with the "Treasure of the Humble," though it differs therefrom in treatment; for whereas the earlier work might perhaps be described as the eager speculation of a poet athirst for beauty, we have here rather the endeavour of an earnest thinker to discover the abode of truth. And if the result of his thought be that truth and happiness are one, this was by no means the object wherewith he set forth. Here he is no longer content with exquisite visions, alluring or haunting images; he probes into the soul of man and lays bare all his joys and his sorrows. It is as though he had forsaken the canals he loves so well—the green, calm, motionless canals that faithfully mirror the silent trees and moss-covered roofs—and had adventured boldly, unhesitatingly, on the broad river of life.

He describes this book himself, in a kind of introduction that is almost an apology, as "a few interrupted thoughts that entwine themselves, with more or less system, around two or three subjects." He declares that there is nothing it undertakes to prove; that there are none whose mission it is to convince. And so true is this, so absolutely honest and sincere is the writer, that he does not shrink from attacking, qualifying, modifying, his own propositions; from advancing, and insisting on, every objection that flits across his brain; and if such proposition survive the onslaught of its adversaries, it is only because, in the deepest of him, he holds it for absolute truth. For this book is indeed a confession, a naive, outspoken, unflinching description of all that passes in his mind; and even those who like not his theories still must admit that this mind is strangely beautiful.

There have been many columns filled—and doubtless will be again—with ingenious and scholarly attempts to place a definitive label on M. Maeterlinck, and his talent; to trace his thoughts to their origin, clearly denoting the authors by whom he has been influenced; in a measure to predict his future, and accurately to establish the place that he fills in the hierarchy of genius. With all this I feel that I have no concern. Such speculations doubtless have their use and serve their purpose. I shall be content if I can impress upon those who may read these lines, that in this book the man is himself, of untrammelled thought; a man possessed of the rare faculty of seeing beauty in all things, and, above all, in truth; of the still rarer faculty of loving all things, and, above all, life.

Nor is this merely a vague and, at bottom, a more or less meaningless statement. For, indeed, considering this essay only, that deals with wisdom and destiny, at the root of it—its fundamental principle, its guiding, inspiring thought—is love. "Nothing is contemptible in this world save only scorn," he says; and for the humble, the foolish, nay, even the wicked, he has the same love, almost the same admiration, as for the sage, the saint, or the hero....