Wired Love A Romance of Dots and Dashes 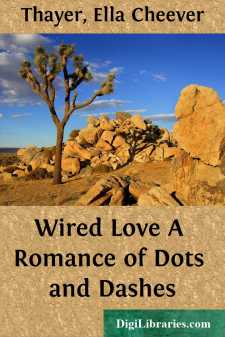 SOUNDS FROM A DISTANT "C."

Just a noise, that is all.

But a very significant noise to Miss Nathalie Rogers, or Nattie, as she was usually abbreviated; a noise that caused her to lay aside her book, and jump up hastily, exclaiming, with a gesture of impatience:—

"Somebody always 'calls' me in the middle of every entertaining chapter!"

For that noise, that little clatter, like, and yet too irregular to be the ticking of a clock, expressed to Nattie these four mystic letters:—

which same four mystic letters, interpreted, meant that the name, or, to use the technical word, "call," of the telegraph office over which she was present sole presiding genius, was "B m," and that "B m" was wanted by another office on the wire, designated as "X n."

A little, out-of-the-way, country office, some fifty miles down the line, was "X n," and, as Nattie signaled in reply to the "call" her readiness to receive any communications therefrom, she was conscious of holding in some slight contempt the possible abilities of the human portion of its machinery.

For who but an operator very green in the profession would stay there?

Consequently, she was quite unprepared for the velocity with which the telegraph alphabet of sounds in dots and dashes rattled over the instrument, appropriately termed a "sounder," upon which messages are received, and found herself wholly unable to write down the words as fast as they came.

"Dear me!" she thought, rather nervously, "the country is certainly ahead of the city this time! I wonder if this smart operator is a lady or gentleman!"

And, notwithstanding all her efforts, she was compelled to "break"—that is, open her "key," thereby breaking the circuit, and interrupting "X n" with the request,

"X n" took the interruption very good-naturedly—it was after dinner—and obeyed without expressing any impatience.

But, alas! Nattie was even now unable to keep up with this too expert individual of uncertain sex, and was obliged again to "break," with the humiliating petition,

For a small one, "Oh!" is a very expressive word. But whether this particular one signified impatience, or, as Nattie sensitively feared, contempt for her abilities, she could not tell. But certain it was that "X n" sent along the letters now, in such a slow, funereal procession that she was driven half frantic with nervousness in the attempt to piece them together into words. They had not proceeded far, however, before a small, thin voice fell upon the ears of the agitated Nattie.

"Are you taking a message now?" it asked.

Nattie glanced over her shoulder, and saw a sharp, inquisitive nose, a green veil, a pair of eye-glasses, and a strained smile, sticking through her little window.

Nodding a hasty answer to the question, she wrote down another word of the message, that she had been able to catch, notwithstanding the interruption. As she did so the voice again queried,

"Do you take them entirely by sound?"

With a determined endeavor not to "break," Nattie replied only with a frown....