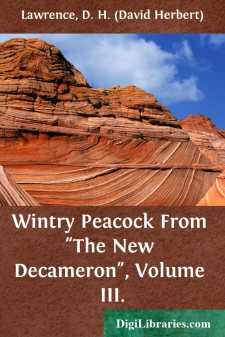 There was thin, crisp snow on the ground, the sky was blue, the wind very cold, the air clear. Farmers were just turning out the cows for an hour or so in the midday, and the smell of cow-sheds was unendurable as I entered Tible. I noticed the ash-twigs up in the sky were pale and luminous, passing into the blue. And then I saw the peacocks. There they were in the road before me, three of them, and tailless, brown, speckled birds, with dark-blue necks and ragged crests. They stepped archly over the filigree snow, and their bodies moved with slow motion, like small, light, flat-bottomed boats. I admired them, they were curious. Then a gust of wind caught them, heeled them over as if they were three frail boats, opening their feathers like ragged sails. They hopped and skipped with discomfort, to get out of the draught of the wind. And then, in the lee of the walls, they resumed their arch, wintry motion, light and unballasted now their tails were gone, indifferent. They were indifferent to my presence. I might have touched them. They turned off to the shelter of an open shed.

As I passed the end of the upper house, I saw a young woman just coming out of the back door. I had spoken to her in the summer. She recognised me at once, and waved to me. She was carrying a pail, wearing a white apron that was longer than her preposterously short skirt, and she had on the cotton bonnet. I took off my hat to her and was going on. But she put down her pail and darted with a swift, furtive movement after me.

She gave me a slight, odd smile, and ran back. Her face was long and sallow and her nose rather red. But her gloomy black eyes softened caressively to me for a moment, with that momentary humility which makes a man lord of the earth.

I stood in the road, looking at the fluffy, dark-red young cattle that mooed and seemed to bark at me. They seemed happy, frisky cattle, a little impudent, and either determined to go back into the warm shed, or determined not to go back. I could not decide which.

Presently the woman came forward again, her head rather ducked. But she looked up at me and smiled, with that odd, immediate intimacy, something witch-like and impossible.

"Sorry to keep you waiting," she said. "Shall we stand in this cart-shed—it will be more out of the wind."

So we stood among the shafts of the open cart-shed, that faced the road. Then she looked down at the ground, a little sideways, and I noticed a small black frown on her brows. She seemed to brood for a moment. Then she looked straight into my eyes, so that I blinked and wanted to turn my face aside. She was searching me for something and her look was too near. The frown was still on her keen, sallow brow.

"Can you speak French?" she asked me abruptly.

"I was supposed to learn it at school," she said. "But I don't know a word." She ducked her head and laughed, with a slightly ugly grimace and a rolling of her black eyes.

"No good keeping your mind full of scraps," I answered.

But she had turned aside her sallow, long face, and did not hear what I said. Suddenly again she looked at me. She was searching. And at the same time she smiled at me, and her eyes looked softly, darkly, with infinite trustful humility into mine. I was being cajoled.

"Would you mind reading a letter for me, in French?" she said, her face immediately black and bitter-looking. She glanced at me, frowning.

"It's a letter to my husband," she said, still scrutinising.

I looked at her, and didn't quite realise. She looked too far into me, my wits were gone. She glanced round. Then she looked at me shrewdly. She drew a letter from her pocket, and handed it to me. It was addressed from France to M. Alfred Goyte, at Tible. I took out the letter and began to read it, as mere words. "Mon cher Alfred"—it might have been a bit of a torn newspaper. So I followed the script: the trite phrases of a letter from a French-speaking girl to an Englishman. "I think of you always, always. Do you think sometimes of me?" And then I vaguely realised that I was reading a man's private correspondence....