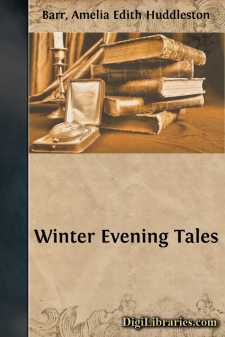 "Gold may be dear bought."

A narrow street with dreadful "wynds" and "vennels" running back from it was the High street of Glasgow at the time my story opens. And yet, though dirty, noisy and overcrowded with sin and suffering, a flavor of old time royalty and romance lingered amid its vulgar surroundings; and midway of its squalid length a quaint brown frontage kept behind it noble halls of learning, and pleasant old courts full of the "air of still delightful studies."

From this building came out two young men in academic costume. One of them set his face dourly against the clammy fog and drizzling rain, breathing it boldly, as if it was the balmiest oxygen; the other, shuddering, drew his scarlet toga around him and said, mournfully, "Ech, Davie, the High street is an ill furlong on the de'il's road! I never tread it, but I think o' the weary, weary miles atween it and Eden."

"There is no road without its bad league, Willie, and the High street has its compensations; its prison for ill-doers, its learned college, and its holy High Kirk. I am one of St. Mungo's bairns, and I'm not above preaching for my saint."

"And St. Mungo will be proud of your birthday yet, Davie. With such a head and such a tongue, with knowledge behind, and wit to the fore, there is a broad road and an open door for David Lockerby. You may come even to be the Lord Rector o' Glasgow College yet."

"Wisdom is praised and starves; I am thinking it would set me better to be Lord Provost of Glasgow city."

"The man who buried his one talent did not go scatheless, Davie; and what now if he had had ten?"

"You are aye preaching, Willie, and whiles it is very untimeous. Are you going to Mary Moir's to-night?"

"Why should I? The only victory over love is through running away."

David looked sharply at his companion but as they were at the Trongate there was no time for further remark. Willie Caird turned eastward toward Glasgow Green, David hailed a passing omnibus and was soon set down before a handsome house on the Sauchiehall Road. He went in by the back door, winning from old Janet, in spite of herself, the grimmest shadow of a smile.

"Are my father and mother at home, Janet?"

"Deed are they, the mair by token that they hae been quarreling anent you till the peacefu' folks like mysel' could hae wished them mair sense, or further away."

"Why should they quarrel about me?"

"Why, indeed, since they'll no win past your ain makin' or marring? But the mistress is some kin to Zebedee's wife, I'm thinking, and she wad fain set you up in a pu'pit and gie you the keys o' St. Peter; while maister is for haeing you it a bank or twa in your pouch, and add Ellenmount to Lockerby, and—"

"Tut, tut, lad! If it werna for 'if' you might put auld Scotland in a bottle."

"But what was the upshot, Janet?"

Then David went upstairs to his own room, and when he came down again his face was set as dourly against the coming interview as it had been against the mist and rain....