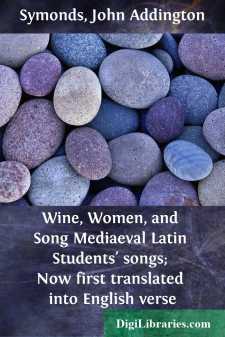 When we try to picture to ourselves the intellectual and moral state of Europe in the Middle Ages, some fixed and almost stereotyped ideas immediately suggest themselves. We think of the nations immersed in a gross mental lethargy; passively witnessing the gradual extinction of arts and sciences which Greece and Rome had splendidly inaugurated; allowing libraries and monuments of antique civilisation to crumble into dust; while they trembled under a dull and brooding terror of coming judgment, shrank from natural enjoyment as from deadly sin, or yielded themselves with brutal eagerness to the satisfaction of vulgar appetites. Preoccupation with the other world in this long period weakens man's hold upon the things that make his life desirable. Philosophy is sunk in the slough of ignorant, perversely subtle disputation upon subjects destitute of actuality. Theological fanaticism has extinguished liberal studies and the gropings of the reason after truth in positive experience. Society lies prostrate under the heel of tyrannous orthodoxy. We discern men in masses, aggregations, classes, guilds—everywhere the genus and the species of humanity, rarely and by luminous exception individuals and persons. Universal ideals of Church and Empire clog and confuse the nascent nationalities. Prolonged habits, of extra-mundane contemplation, combined with the decay of real knowledge, volatilise the thoughts and aspirations of the best and wisest into dreamy unrealities, giving a false air of mysticism to love, shrouding art in allegory, reducing the interpretation of texts to an exercise of idle ingenuity, and the study of Nature (in Bestiaries, Lapidaries, and the like) to an insane system of grotesque and pious quibbling. The conception of man's fall and of the incurable badness of this world bears poisonous fruit of cynicism and asceticism, that twofold bitter almond, hidden in the harsh monastic shell. The devil has become God upon this earth, and God's eternal jailer in the next world. Nature is regarded with suspicion and aversion; the flesh, with shame and loathing, broken by spasmodic outbursts of lawless self-indulgence. For human life there is one formula:—

"Of what is't fools make such vain keeping?Sin their conception, their birth weeping,Their life a general mist of error,Their death a hideous storm of terror."

The contempt of the world is the chief theme of edification. A charnel filled with festering corpses, snakes, and worms points the preacher's moral. Before the eyes of all, in terror-stricken vision or in nightmares of uneasy conscience, leap the inextinguishable flames of hell. Salvation, meanwhile, is being sought through amulets, relics, pilgrimages to holy places, fetishes of divers sorts and different degrees of potency. The faculties of the heart and head, defrauded of wholesome sustenance, have recourse to delirious debauches of the fancy, dreams of magic, compacts with the evil one, insanities of desire, ineptitudes of discipline....