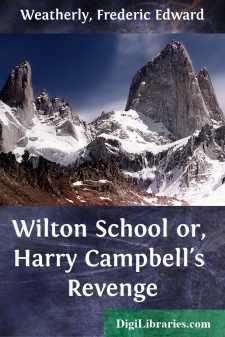 It was a sad evening in the little farm by the church of Wilton, yet very sweet and summer-like without. Very sad it was in the low, dim, oak-panelled parlour, whose diamonded window looked across the quiet churchyard, with its swinging wicket, its gravel-path beneath green aisles of lindens, and all the countless

"Grassy barrows of the happier dead."

Very sad were those three sitters in the summer twilight, there, at the farm; for a good-bye had to be said—a long, long farewell between that weeping pale woman, and the stout sailor, her husband. And Harry, their blue-eyed, sunny-haired boy, did not understand what it all meant;—why papa did not cheer mamma with hopes of soon coming home again—why mamma did not try to console herself by saying, over and over, that he would soon come back, as she always used in the old days when papa had to go to sea. She had never cried so bitterly before, although these good-byes had come so often. And now it made her cough; she seemed scarcely to have strength to cry. And papa, who was always so brave and stern, why was it even he could not stop the tears from rolling down his bronzed cheeks? And so Harry sat in the window-seat, quite unable to understand the meaning of all the sorrow, and looked out of the window at the farmer's wife nursing her last baby in the orchard, and then at the old sexton in the churchyard throwing up the red earth, and wondered why he always whistled such a jovial tune, while he himself felt so sad.

And the evening drew on over the straggling village, weary with its long day's work. The last loaded waggon had passed down the lane by the farm; the last troop of tired hay-makers had trudged gaily homewards; and with the deepening dusk the winds grew cooler, blowing in fresh, along the valley, from the sea.

And, all this while, poor Harry sat with his face pressed closely against the window-pane; and his papa and mamma, apparently unheeding him, sat talking in the far dim corner of the room, while ever anon her great sobs broke the train of comforting words her husband strove to utter.

Presently, he got up, moved to the window, and without saying a word, took Harry's hand and led him across the room to his mother's side. Then his faltering lips said:

"Harry, my boy, mamma is going away soon—before I come back;—I shall not see her again."

"Not see her again, papa?" cried Harry in amazement. "And why is mamma going away, with her cough so bad, too?"

"Mamma's cough won't trouble her long, my boy. You'll take care of her for me, won't you, Harry? and see her safe off on her journey?"

He spoke very quietly now; but if he had not used those ambiguous sentences, he would have broken down, he knew.

And then the good-bye was said. He kissed Harry tenderly, and then gathered his weeping wife to his breast. And with an earnest "God guard you!" that well-nigh seemed to break the bursting heart from whence the words arose, he moved quickly from the room....