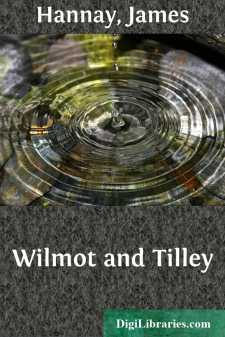 The contest for responsible government which was carried on in all the provinces of British North America for so many years resembled in some of its features a modern battle, where the field of operations is so wide that it is impossible for a general to cover it with his eye or to keep control of all the movements of his subordinates. In such a case, everything depends on the ability of the generals who command the different army corps, who, operating in remote parts of the field, must take the responsibility of success or failure. The two Canadas were so far removed from New Brunswick, and the means of communication were so poor, that there was but little help, even in the way of suggestion, to be expected from them, while the contest for responsible government was being carried on. Even the efforts in the same direction which were being made in the province of Nova Scotia had but little influence on the course of events in New Brunswick, for each province had its own particular grievances and its own separate interests. Thus it happened that the battle for responsible government in New Brunswick was fought, to a large extent, without reference to what was being done in the other provinces which now form the Dominion of Canada, and the leaders of the movement had to be guided by the peculiar local circumstances of the situation. Still, there is no doubt that the efforts of all the provinces, directed to the same ends, were mutually helpful and made the victory more easily won.

Among the men who took a part in the contest for responsible government in New Brunswick, Lemuel Allan Wilmot undoubtedly held the foremost place, not only by reason of the ability with which he advocated the cause, but from the trust which the people had in him, which made him a natural leader and the proper exponent of their views. There were, indeed, men working in the same field before his time, but it was his happy fortune to witness the fruit of his labours to give the province a better form of government, and to bring its constitution into line with the system which prevailed in the mother country. He not only viewed the land of promise from afar, but he entered into it, and he became the first native lieutenant-governor of the province,—a result which even he, sanguine as he was, could hardly have contemplated when he began his career as a public man.

Lemuel Allan Wilmot was born in the county of Sunbury, on the banks of the St. John River, on January 31st, 1809. He was the son of William Wilmot, a respectable merchant and lumberman, who was in partnership with William Peters, grandfather of Sir Leonard Tilley. William Wilmot was the son of Lemuel Wilmot, a Loyalist, who was a resident of Poughkeepsie, New York, at the beginning of the Revolution. He (Lemuel) raised a company of soldiers for the service of the king, and became a captain in the Loyal American Regiment which was commanded by Beverley Robinson, serving in that corps during the war....