Willy Reilly The Works of William Carleton, Volume One 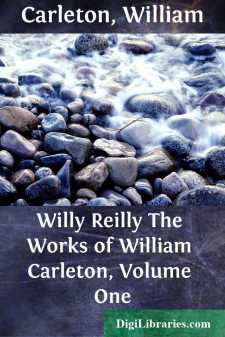 CHAPTER I.—An Adventure and an Escape.

* I mean no offence whatsoever to this distinguished andmultitudinous writer; but the commencement of this novel reallyresembled that of so many of his that I was anxious to avoid thecharge of imitating him.

It was one evening at the close of a September month and a September day that two equestrians might be observed passing along one of those old and lonely Irish roads that seemed, from the nature of its construction, to have been paved by a society of antiquarians, if a person could judge from its obsolete character, and the difficulty, without risk of neck or limb, of riding a horse or driving a carriage along it. Ireland, as our English readers ought to know, has always been a country teeming with abundance—a happy land, in which want, destitution, sickness, and famine have never been felt or known, except through the mendacious misrepresentations of her enemies. The road we speak of was a proof of this; for it was evident to every observer that, in some season of superabundant food, the people, not knowing exactly how to dispose of their shilling loaves, took to paving the common roads with them, rather than they should be utterly useless. These loaves, in the course of time, underwent the process of petrifaction, but could not, nevertheless, be looked upon as wholly lost to the country. A great number of the Irish, within six of the last preceding years—that is, from '46 to '52—took a peculiar fancy for them as food, which, we presume, caused their enemies to say that we then had hard times in Ireland. Be this as it may, it enabled the sagacious epicures who lived upon them to retire, in due course, to the delightful retreats of Skull and Skibbereen,* and similar asylums, there to pass the very short remainder of their lives in health, ease, and luxury.

* Two poor-houses in the most desolate parts of the County ofCork, where famine, fever, dysentery, and cholera, rendered moredestructive by the crowded state of the houses and the consequentwant of ventilation, swept away the wretched in-mates to theamount, if we recollect rightly, of sometimes from fifty toseventy per diem in the years '45 and '47.

The evening, as we have said, was about the close of September, when the two equestrians we speak of were proceeding at a pace necessarily slow. One of them was a bluff, fresh-complexioned man, of about sixty summers; but although of a healthy look, and a frame that had evidently once been vigorous, yet he was a good deal stooped, had about him all the impotence of plethora, and his hair, which fell down his shoulders, was white as snow. The other, who rode pretty close to him, was much about his own age, or perhaps a few years older, if one could judge by a face that gave more undeniable evidences of those furrows and wrinkles which Time usually leaves behind him. This person did not ride exactly side by side with the first-mentioned, but a little aback, though not so far as to prevent the possibility of conversation....