William Shakespeare His Homes and Haunts 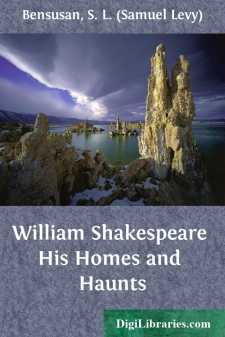 In telling the story of Shakespeare's life and work within strict limits of space, an attempt has been made to keep closely to essential matters. There is no period of the poet's life, there is no branch of his marvellous work, that has not been the subject of long and learned volumes, no single play that has not been discussed at greater length than serves here to cover the chief incidents of work and life together. If the Homes and Haunts do not claim the greater part of the following pages, it is because nobody knows where to find them to-day. Stratford derives much of its patronage from unsupported traditions, the face of London has changed, and though we owe to the painstaking researches of Dr. Chas. Wm. Wallace the very recent discovery that the poet lodged with a wig-maker named Mountjoy at the corner of Silver and Monkwell Streets in the City of London, much labour must be accomplished before we shall be able to follow his wanderings between the time of his arrival in and departure from the metropolis.

For the purposes of this little book many authorities have been consulted, and the writer is specially indebted to the researches of Dr. Sidney Lee, the leading authority of our time on Shakespeare, and the late Professor Churton Collins.

To read the works of a great master of letters, or to study the art of a great painter, without some first-hand knowledge of the country in which each lived and from which each gathered his earliest inspiration, is to court an incomplete impression. It is in the light of a life story and its setting, however slight our knowledge, that creative work tends to assume proper proportions. It is in the surroundings of the author that we find the key to the creation. For, as Gray has pointed out in his "Elegy written in a Country Churchyard," there are many in the dust and silence whose hands "the rod of Empire might have swayed, or waked to ecstasy the living lyre."

We know that it is not enough to have the creative force dormant in the mind; environment must be favourable to its development, or it will sleep too long. We see in the briefest survey of the lives of the poet, the statesman, the soldier and the artist, that there are many great ones who would have been greater still were it not that then, as now, "man is one and the fates are three."

To study the life history of a man and to consider its setting is to understand why he succeeded and how he came to fail, and our wonder at his success will not be lessened when we find that some simple event, favourable or untoward, was the deciding factor in a great life. The hour brings the man, but circumstances mould him and chance leads him to the fore, unless it be true that "there's a Divinity that shapes our ends, rough hew them how we will." In our own time we have seen how the greatest empire-builder of Victorian history, Cecil John Rhodes, came into prominence because he was sent to South Africa for the cure of weak lungs....