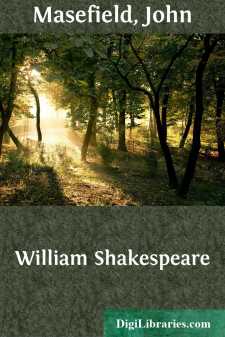 CHAPTER I THE LIFE OF SHAKESPEARE

Stratford-on-Avon is cleaner, better paved, and perhaps more populous than it was in Shakespeare's time. Several streets of mean red-brick houses have been built during the last half century. Hotels, tea rooms, refreshment rooms, and the shops where the tripper may buy things to remind him that he has been where greatness lived, give the place an air at once prosperous and parasitic. The town contains a few comely old buildings. The Shakespeare house, a detached double dwelling, once the home of the poet's father, stands on the north side of Henley Street. A room on the first floor, at the western end, is shown to visitors as the room in which the poet was born. There is not the slightest evidence to show that he was born there. One scanty scrap of fact exists to suggest that he was born at the eastern end. The two dwellings have now been converted into one, which serves as a museum. New Place, the house where Shakespeare died, was pulled down in the middle of the eighteenth century. For one museum the less let us be duly thankful.

The church in which Shakespeare, his wife, and little son are buried stands near the river. It is a beautiful building of a type common in the Cotswold country. It is rather larger and rather more profusely carved than most. Damp, or some mildness in the stone, has given much of the ornament a weathered look. Shakespeare is buried seventeen feet down near the north wall of the chancel. His wife is buried in another grave a few feet from him.

The country about Stratford is uninteresting, pretty, and well watered. A few miles away the Cotswold hills rise. They have a bold beauty, very pleasant after the flatness of the plain. The wolds towards Stratford grow many oaks and beeches. Farther east, they are wilder and barer. Little brooks spring up among the hills. The nooks and valleys are planted with orchards. Old, grey Cotswold farmhouses, and little, grey, lovely Cotswold villages show that in Shakespeare's time the country was prosperous and alive. It was sheep country then. The wolds were sheep walks. Life took thought for Shakespeare. She bred him, mind and bone, in a two-fold district of hill and valley, where country life was at its best and the beauty of England at its bravest. Afterwards she placed him where there was the most and the best life of his time. Work so calm as his can only have come from a happy nature, happily fated. Life made a golden day for her golden soul. The English blessed by that soul have raised no theatre for the playing of the soul's thanksgiving.

Legends about Shakespeare began to spring up in Stratford as soon as there was a demand for them. Legends are a stupid man's excuse for his want of understanding. They are not evidence. Setting aside the legends, the lies, the surmises and the imputations, several uninteresting things are certainly known about him.

We know that he was the first son and third child of John Shakespeare, a country trader settled at Stratford, and of Mary his wife; that he was baptised on the 26th April, 1564; and that in 1582 he got with child a woman named Anne or Agnes Hathaway, eight years older than himself. Her relatives saw to it that he married her. A daughter (Susanna) was born to him in May 1583, less than six months after the marriage. In January 1585 twins were born to him, a son (Hamnet, who died in 1596) and a daughter (Judith).

At this point he disappears. Legend, written down from a hundred to a hundred and sixty years after the event, says that he was driven out of the county for poaching, that he was a country school-master, that he made a "very bitter" ballad upon a landlord, that he tramped to London, that he held horses outside the theatre doors, and that at last he was received into a theatrical company "in a very mean rank." This is all legend, not evidence....