William Pitt and the Great War 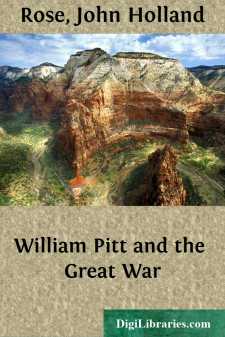 In the former volume, entitled "William Pitt and National Revival," I sought to trace the career of Pitt the Younger up to the year 1791. Until then he was occupied almost entirely with attempts to repair the evils arising out of the old order of things. Retrenchment and Reform were his first watchwords; and though in the year 1785 he failed in his efforts to renovate the life of Parliament and to improve the fiscal relations with Ireland, yet his domestic policy in the main achieved a surprising success. Scarcely less eminent, though far less known, were his services in the sphere of diplomacy. In the year 1783, when he became First Lord of the Treasury and Chancellor of the Exchequer, nearly half of the British Empire was torn away, and the remainder seemed to be at the mercy of the allied Houses of Bourbon. France, enjoying the alliance of Spain and Austria and the diplomatic wooings of Catharine II and Frederick the Great, gave the law to Europe.

By the year 1790 all had changed. In 1787 Pitt supported Frederick William II of Prussia in overthrowing French supremacy in the Dutch Netherlands; and a year later he framed with those two States an alliance which not only dictated terms to Austria at the Congress of Reichenbach but also compelled her to forego her far-reaching schemes on the lower Danube, and to restore the status quo in Central Europe and in her Belgian provinces. British policy triumphed over that of Spain in the Nootka Sound dispute of the year 1790, thereby securing for the Empire the coast of what is now British Columbia; it also saved Sweden from a position of acute danger; and Pitt cherished the hope of forming a league of the smaller States, including the Dutch Republic, Denmark, Sweden, Poland, and, if possible, Turkey, which, with support from Great Britain and Prussia, would withstand the almost revolutionary schemes of the Russian and Austrian Courts.

These larger aims were unattainable. The duplicity of the Court of Berlin, the triumphs of the Russian arms on the Danube, and changes in the general diplomatic situation, enabled Catharine II to foil the efforts of Pitt in 1791. She worked her will on the Turks and not long after on the Poles; Sweden came to an understanding with her; and Prussia, slighting the British alliance, drew near to the new Hapsburg Sovereign, Leopold II. In fact, the events of the French Revolution in the year 1791 served to focus attention more and more upon Paris; and monarchs who had thought of little but the conquest or partition of weaker States now talked of a crusade to restore order at Paris, with Gustavus III of Sweden as the new Cœur de Lion. This occidentation of diplomacy became pronounced at the time of the attempted escape of Louis XVI and Marie Antoinette to the eastern frontier at Midsummer 1791. Their capture at Varennes and their ignominious return to Paris are in several respects the central event of the French Revolution. The incident aroused both democrats and royalists to a fury which foredoomed to failure all attempts at compromise between the old order and the new....