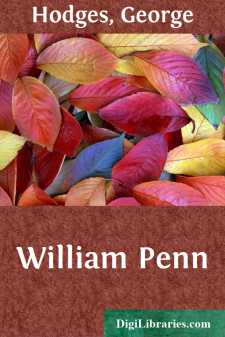 The mother of William Penn came from Rotterdam, in Holland. She was the daughter of John Jasper, a merchant of that city. The lively Mr. Pepys, who met her in 1664, when William was twenty years of age, describes her as a "fat, short, old Dutchwoman," and says that she was "mighty homely." He records a tattling neighbor's gossip that she was not a good housekeeper. He credits her, however, with having more wit and discretion than her husband, and liked her better as his acquaintance with her progressed. That she was of a cheerful disposition is evidenced by many passages of Pepys's Diary. That is all we know about her.

William's father was an ambitious, successful, and important person. He was twenty-two years old, and already a captain in the navy, when he married Margaret Jasper. The year after his marriage he was made rear-admiral of Ireland; two years after that, admiral of the Straits; in four years more, vice-admiral of England; and the next year, a "general of the sea" in the Dutch war. This was in Cromwell's time, when the naval strength of England was being mightily increased. A young man of energy and ability, acquainted with the sea, was easily in the line of promotion.

The family was ancient and respectable. Penn's father, however, began life with little money or education, and few social advantages. Lord Clarendon observed of him that he "had a great mind to appear better bred, and to speak like a gentleman," implying that he found some difficulty in so doing. Clarendon said, also, that he "had many good words which he used at adventure."

The Penns lived on Tower Hill, in the Parish of St. Catherine's, in a court adjoining London Wall. There they resided in "two chambers, one above another," and fared frugally. There William was born on the 14th of October, 1644.

Marston Moor was fought in that year, and all England was taking sides in the contention between the Parliament and the king. The navy was in sympathy with the Parliament; and the young officer, though his personal inclinations were towards the king, went with his associates. But in 1654 he appears to have lost faith in the Commonwealth. Cromwell sent an expedition to seize the Spanish West Indies. He put Penn in charge of the fleet, and made Venables general of the army. The two commanders, without conference one with the other, sent secret word to Charles II., then in exile on the Continent, and offered him their ships and soldiers. This transaction, though it seemed for the moment to be of none effect, resulted years afterward in the erection of the Colony of Pennsylvania. Charles declined the offer; "he wished them to reserve their affections for his Majesty till a more proper season to discover them;" but he never forgot it. It was the beginning of a friendship between the House of Stuart and the family of Penn, which William Penn inherited.

The expedition captured Jamaica, and made it a British colony; but in its other undertakings it failed miserably; and the admiral, on his return, was dismissed from the navy and committed to the Tower....