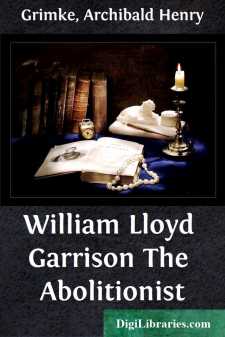 "Help came but slowly" to the reformer. With a single instrument he had stirred the nation, as no other man had done, on the slavery question. He had thrown the South into widespread excitement, and thawed the apathy of the North into widespread attention. He had won an almost instant hearing for his cause. But he knew that this was not enough. Effective as he had shown the weapon of the press to be, it alone was unequal to the conduct of prolonged agitation. And prolonged agitation Garrison clearly apprehended was to be the price of abolition. Back of him and the Liberator he needed an organized force, coadjutors like Aaron and Hur to hold up his arms during the mighty conflict on which he had now entered with the slave interests of the country. Those interests were organized, and because they were organized they were powerful. The sentiment of freedom he determined to organize and to render it thereby invincible. To organized wrong he designed to oppose organized right, confident that organized right would prevail in the end. He had knowledge of the utility of temperance societies in advancing the cause of sobriety among the people. He had learned from Lundy how much he had relied upon the union of men as anti-slavery helps. Garrison determined to summon to his side the powerful agency of an anti-slavery society devoted to immediate and unconditional emancipation. He had already made converts; he had already a small following. At Julien Hall, on the occasion of his first lecture on the subject of slavery, he had secured three remarkable men to the movement, viz., Rev. Samuel J. May, then a young Unitarian minister, Samuel E. Sewall, a young member of the Bar, and A. Bronson Alcott, a sage even in his early manhood. They had all promised him aid and comfort in the great task which he had undertaken. A little later two others, quite as remarkable as those first three were drawn to the reformer's side, and abetted him in the treason to iniquity, which he was prosecuting through the columns of the Liberator with unrivaled zeal and devotion. These disciples were Ellis Grey Loring and David Lee Child. They were a goodly company, were these five conspirators, men of intellect and conscience, of high family and social connections, of brilliant attainments and splendid promises for the future. To this number must be added a sixth, Oliver Johnson, who was at the time editing The Christian Soldier, disciple of Garrison then, and ever after his devoted friend. The early promises of this noble half dozen friends of the slave were more than fulfilled in after years. Often to the dingy room "under the eaves" in Merchants' Hall they climbed to carry aid and comfort to "one poor, unlearned young man," and to sit at his feet in this cradle-room of the new movement. It was there in communion with the young master that suggestions looking to the formation of an anti-slavery society, were doubtless first thrown out.

"The place was dark, unfurnitured and mean;Yet there the freedom of a race began."

It was not all clear sailing for the editor of the Liberator even with such choice spirits. They did not always carry aid and comfort to him, but differences of opinions sometimes as well. He did not sugar-coat enough the bitter truth which he was telling to the nation. Some of them would have preferred The Safety Lamp to the Liberator as a title less likely to offend the prejudices of many good people. Some again objected to the pictorial heading of the paper as an altogether unwise proceeding, and positively mischievous. He had the same experience when the formation of an Abolition society was under consideration. He was confronted with this benevolent aversion to giving offence by calling things by their right names. But much as he desired to have his friends and followers organized for associated action, where a principle was at stake he was with them as with slavery itself absolutely inflexible and uncompromising. He was for organizing on the principle of immediate emancipation. A few deemed that ground too radical and revolutionary, and were for ranging themselves under the banner of Gradualism, thinking to draw to their ranks a class of people, who would be repelled by Immediatism. But Garrison was unyielding, refused to budge an inch to conciliate friend or foe—not even such stanch supporters as were Sewall and Loring, who supplied him again and again with money needed to continue the publication of the Liberator. No, he was right and they were wrong, and they, not he, ought accordingly to yield. The contention between the leader and his disciples was not what was expedient, but what was right. It was on the part of the leader the assertion of a vital principle, and on this ground he was pledged against retreat. The mountain could not go to Mahomet, therefore Mahomet must needs go to the mountain. Garrison could not abandon his position, wherefore in due time Loring, Child, and Sewall surrendered theirs. Finely has Lowell expressed this righteous stubbornness, and steadfastness to principle in three stanzas of his poem entitled, "The Day of Small Things," and which have such an obvious lesson for our own times that I shall venture to quote them in this place:

"Who is it will not dare himself to trust?Who is it hath not strength to stand alone?Who is it thwarts and bilks the inward MUST?He and his works, like sand from earth are blown. "Men of a thousand shifts and wiles look here!See one straightforward conscience put in pawnTo win a world! See the obedient sphereBy bravery's simple gravitation drawn! "Shall we not heed the lesson taught of old,And by the Present's lips repeated still,In our own single manhood to be bold,Fortressed in conscience and impregnable will?"

The history of the making of this first society is an interesting story. There were four meetings in all before it was found possible to complete the work of its organization....