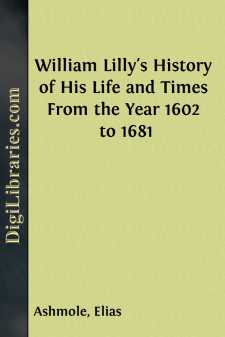 THE LIFE OF WILLIAM LILLY, STUDENT IN ASTROLOGY.

Wrote by himself in the 66th Year of his Age, at Hersham, in the Parish of Walton-upon-Thames, in the County of Surry. Propria Manu.

I was born in the county of Leicester, in an obscure town, in the north-west borders thereof, called Diseworth, seven miles south of the town of Derby, one mile from Castle-Donnington, a town of great rudeness, wherein it is not remembered that any of the farmers thereof did ever educate any of their sons to learning, only my grandfather sent his younger son to Cambridge, whose name was Robert Lilly, and died Vicar of Cambden in Gloucestershire, about 1640.

"William Lilly was a prominent, and, in the opinion of many of his cotemporaries, a very important personage in the most eventful period of English history. He was a principal actor in the farcical scenes which diversified the bloody tragedy of civil war; and while the King and the Parliament were striving for mastery in the field, he was deciding their destinies in the closet. The weak and the credulous of both parties, who sought to be instructed in 'destiny's dark counsels,' flocked to consult the 'wily Archimage,' who, with exemplary impartiality, meted out victory and good fortune to his clients, according to the extent of their faith, and the weight of their purses. A few profane Cavaliers might make his name the burthen of their malignant rhymes—a few of the more scrupulous among the Saints might keep aloof in sanctified abhorrence of the 'Stygian sophister'—but the great majority of the people lent a willing and reverential ear to his prophecies and prognostications. Nothing was too high or too low—too mighty or too insignificant, for the grasp of his genius. The stars, his informants, were as communicative on the most trivial as on the most important subjects. If a scheme was set on foot to rescue the king, or to retrieve a stray trinket—to restore the royal authority, or to make a frail damsel an honest woman—to cure the nation of anarchy, or a lap-dog of a surfeit, William Lilly was the oracle to be consulted. His almanacks were spelled over in the tavern and quoted in the senate; they nerved the arm of the soldier, and rounded the periods of the orator. The fashionable beauty, dashing along in her calash from St. James's or the Mall, and the prim, starched dame, from Watling-street or Bucklersbury, with a staid foot-boy, in a plush jerkin, plodding behind her—the reigning toast among 'the men of wit about town,' and the leading groaner in a tabernacle concert—glided alternately into the study of the trusty wizard, and poured into his attentive ear strange tales of love, or trade, or treason. The Roundhead stalked in at one door, whilst the Cavalier was hurried out at the other.

"The Confessions of a man so variously consulted and trusted, if written with the candour of a Cardan or a Rousseau, would indeed be invaluable. The Memoirs of William Lilly, though deficient in this essential ingredient, yet contain a variety of curious and interesting anecdotes of himself and his cotemporaries, which, where the vanity of the writer, or the truth of his art, is not concerned, may be received with implicit credence....