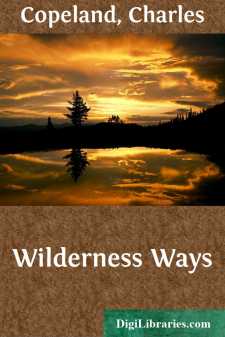 Megaleep is the big woodland caribou of the northern wilderness. His Milicete name means The Wandering One, but it ought to mean the Mysterious and the Changeful as well. If you hear that he is bold and fearless, that is true; and if you are told that he is shy and wary and inapproachable, that is also true. For he is never the same two days in succession. At once shy and bold, solitary and gregarious; restless as a cloud, yet clinging to his feeding grounds, spite of wolves and hunters, till he leaves them of his own free will; wild as Kakagos the raven, but inquisitive as a blue jay,—he is the most fascinating and the least known of all the deer.

One thing is quite sure, before you begin your study: he is never where his tracks are, nor anywhere near it. And if after a season's watching and following you catch one good glimpse of him, that is a good beginning.

I had always heard and read of Megaleep as an awkward, ungainly animal, but almost my first glimpse of him scattered all that to the winds and set my nerves a-tingling in a way that they still remember. It was on a great chain of barrens in the New Brunswick wilderness. I was following the trail of a herd of caribou one day, when far ahead a strange clacking sound came ringing across the snow in the crisp winter air. I ran ahead to a point of woods that cut off my view from a five-mile barren, only to catch breath in astonishment and drop to cover behind a scrub spruce. Away up the barren my caribou, a big herd of them, were coming like an express train straight towards me. At first I could make out only a great cloud of steam, a whirl of flying snow, and here and there the angry shake of wide antlers or the gleam of a black muzzle. The loud clacking of their hoofs, sweeping nearer and nearer, gave a snap, a tingle, a wild exhilaration to their rush which made one want to shout and swing his hat. Presently I could make out the individual animals through the cloud of vapor that drove down the wind before them. They were going at a splendid trot, rocking easily from side to side like pacing colts, power, grace, tirelessness in every stride. Their heads were high, their muzzles up, the antlers well back on heaving shoulders. Jets of steam burst from their nostrils at every bound; for the thermometer was twenty below zero, and the air snapping. A cloud of snow whirled out and up behind them; through it the antlers waved like bare oak boughs in the wind; the sound of their hoofs was like the clicking of mighty castanets—"Oh for a sledge and bells!" I thought; for Santa Claus never had such a team.

So they came on swiftly, magnificently, straight on to the cover behind which I crouched with nerves thrilling as at a cavalry charge,—till I sprang to my feet with a shout and swung my hat; for, as there was meat enough in camp, I had small wish to use my rifle, and no desire whatever to stand that rush at close quarters and be run down. There was a moment of wild confusion out on the barren just in front of me....