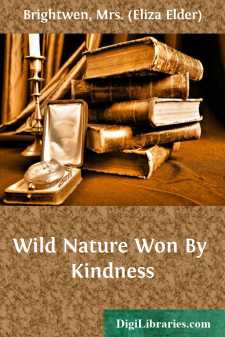 The present edition has been improved by the adoption of a number of illustrations which were designed for the German translation of this book.

HAVE often wished I could convey to others a little of the happiness I have enjoyed all through my life in the study of Natural History. During twenty years of variable health, the companionship of the animal world has been my constant solace and delight. To keep my own memory fresh, in the first instance, and afterwards with a distinct intention of repeating my single experiences to others, I have kept notes of whatever has seemed to me worthy of record in the life of my pets. Some of these papers have already appeared in The Animal World; the majority are now printed for the first time.

In the following chapters I shall try to have quiet talks with my readers and tell them in a simple way about the many pleasant friendships I have had with animals, birds, and insects. I use the word friendships advisedly, because truly to know and enjoy the society of a pet creature you must make it feel that you are, or wish to be, its friend, one to whom it can always look for food, shelter, and solace; it must be at ease and at home with you before its instincts and curious ways will be shown. Sometimes when friends have wished me to see their so-called "pet," some scared animal or poor fluttering bird has been brought, for whom my deepest sympathy has been excited; and yet there may have been perhaps the kindest desire to make the creature happy, food provided in abundance, and a pleasant home; but these alone will not avail. For lack of the quiet gentle treatment which is so requisite, the poor little captive will possibly be miserable, pining for liberty, hating its prison, dreading the visits of its jailor, and so harassed in its terror that in some cases the poor little heart is broken, and in a few hours death is the result. In the following simple sketches of animal, bird, and insect life, I have tried to show how confidence must be gained, and the little wild heart won by quiet and unvarying kindness, and also by the endeavour to imitate as much as possible the natural surroundings of its own life before its capture. I must confess it requires a large fund of patience to tame any wild creature, and it is rarely possible to succeed unless one's efforts begin in its very early days, before it has known the sweets of liberty.

In many cases I have kept a wild animal or bird for a few days to learn something of its ways, possibly to make a drawing of its attitudes or plumage, and then let it go, else nearly all my pets, except imported creatures, have been reared from infancy, an invalid's life and wakefulness making early-morning feeding of young fledglings less difficult than it would have been in many cases, and often have painful hours been made bearable and pleasant by the interest arising from careful observation of the habits and ways of some new pet animal or bird.

I have always strongly maintained that the love of animated nature should be fostered far more than it usually is, and especially in the minds of the young; and that, in fact, we lose an immense amount of enjoyment by passing through life as so many do without a spark of interest in the marvellous world of nature, that book whose pages are ever lying open before us.

The beauties of the country might as well have been left uncreated for all the interest that thousands take in them....