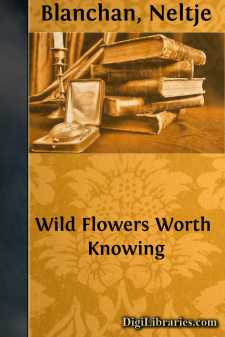 Flowers—White, 1 to 1-1/2 in. wide, in 3-bracted whorls of 3, borne near the summit of a leafless scape 4 in. to 4 ft. tall. Calyx of 3 sepals; corolla of 3 rounded, spreading petals. Stamens and pistils numerous, the former yellow in upper flowers; usually absent or imperfect in lower pistillate flowers. Leaves: Exceedingly variable; those under water usually long and grass-like; upper ones sharply arrow-shaped or blunt and broad, spongy or leathery, on long petioles.

Distribution—From Mexico northward throughout our area to the circumpolar regions.

Wading into shallow water or standing on some muddy shore, like a heron, this striking plant, so often found in that bird's haunts, is quite as decorative in a picture, and, happily, far more approachable in life. Indeed, one of the comforts of botany as compared with bird study is that we may get close enough to the flowers to observe their last detail, whereas the bird we have followed laboriously over hill and dale, through briers and swamps, darts away beyond the range of field-glasses with tantalizing swiftness.

While no single plant is yet thoroughly known to scientists, in spite of the years of study devoted by specialists to separate groups, no plant remains wholly meaningless. When Keppler discovered the majestic order of movement of the heavenly bodies, he exclaimed, "O God, I think Thy thoughts after Thee!"—the expression of a discipleship every reverent soul must be conscious of in penetrating, be it ever so little a way, into the inner meaning of the humblest wayside weed.

Any plant which elects to grow in shallow water must be amphibious: it must be able to breathe beneath the surface as the fish do, and also be adapted to thrive without those parts that correspond to gills; for ponds and streams have an unpleasant way of drying up in summer, leaving it stranded on the shore. This accounts in part for the variable leaves on the arrow-head, those underneath the water being long and ribbon-like, to bring the greatest possible area into contact with the air with which the water is charged. Broad leaves would be torn to shreds by the current through which grass-like blades glide harmlessly; but when this plant grows on shore, having no longer use for its lower ribbons, it loses them, and expands only broad arrow-shaped surfaces to the sunny air, leaves to be supplied with carbonic acid to assimilate, and sunshine to turn off, the oxygen and store up the carbon into their system.

Flowers—Minute, greenish yellow, clustered on the lower part of a smooth, club-shaped, slender spadix within a green and maroon or whitish-striped spathe that curves in a broad-pointed flap above it. Leaves: 3-foliate, usually overtopping the spathe, their slender petioles 9 to 30 in....