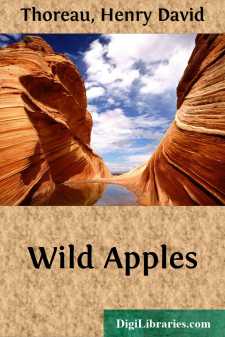 THE HISTORY OF THE APPLE-TREE.

It is remarkable how closely the history of the Apple-tree is connected with that of man. The geologist tells us that the order of the Rosaceae, which includes the Apple, also the true Grasses, and the Labiatae, or Mints, were introduced only a short time previous to the appearance of man on the globe.

It appears that apples made a part of the food of that unknown primitive people whose traces have lately been found at the bottom of the Swiss lakes, supposed to be older than the foundation of Rome, so old that they had no metallic implements. An entire black and shrivelled Crab-Apple has been recovered from their stores.

Tacitus says of the ancient Germans that they satisfied their hunger with wild apples, among other things.

Niebuhr[1] observes that "the words for a house, a field, a plough, ploughing, wine, oil, milk, sheep, apples, and others relating to agriculture and the gentler ways of life, agree in Latin and Greek, while the Latin words for all objects pertaining to war or the chase are utterly alien from the Greek." Thus the apple-tree may be considered a symbol of peace no less than the olive.

The apple was early so important, and so generally distributed, that its name traced to its root in many languages signifies fruit in general. Maelon (Melon), in Greek, means an apple, also the fruit of other trees, also a sheep and any cattle, and finally riches in general.

The apple-tree has been celebrated by the Hebrews, Greeks, Romans, and Scandinavians. Some have thought that the first human pair were tempted by its fruit. Goddesses are fabled to have contended for it, dragons were set to watch it, and heroes were employed to pluck it.[2]

[2] The Greek myths especially referred to are The Choice of Paris and The Apples of the Hesperides.

The tree is mentioned in at least three places in the Old Testament, and its fruit in two or three more. Solomon sings, "As the apple-tree among the trees of the wood, so is my beloved among the sons." And again, "Stay me with flagons, comfort me with apples." The noblest part of man's noblest feature is named from this fruit, "the apple of the eye."

The apple-tree is also mentioned by Homer and Herodotus. Ulysses saw in the glorious garden of Alcinous "pears and pomegranates and apple-trees bearing beautiful fruit." And according to Homer, apples were among the fruits which Tantalus could not pluck, the wind ever blowing their boughs away from him. Theophrastus knew and described the apple-tree as a botanist.

According to the prose Edda,[3] "Iduna keeps in a box the apples which the gods, when they feel old age approaching, have only to taste of to become young again. It is in this manner that they will be kept in renovated youth until Ragnarok" (or the destruction of the Gods).

[3] The stories of the early Scandinavians.

I learn from Loudon[4] that "the ancient Welsh bards were rewarded for excelling in song by the token of the apple-spray;" and "in the Highlands of Scotland the apple-tree is the badge of the clan Lamont."

[4] An English authority on the culture of orchards and gardens....