Wild Animals I Have Known 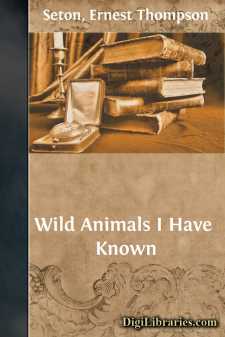 THESE STORIES are true. Although I have left the strict line of historical truth in many places, the animals in this book were all real characters. They lived the lives I have depicted, and showed the stamp of heroism and personality more strongly by far than it has been in the power of my pen to tell.

I believe that natural history has lost much by the vague general treatment that is so common. What satisfaction would be derived from a ten-page sketch of the habits and customs of Man? How much more profitable it would be to devote that space to the life of some one great man. This is the principle I have endeavored to apply to my animals. The real personality of the individual, and his view of life are my theme, rather than the ways of the race in general, as viewed by a casual and hostile human eye.

This may sound inconsistent in view of my having pieced together some of the characters, but that was made necessary by the fragmentary nature of the records. There is, however, almost no deviation from the truth in Lobo, Bingo, and the Mustang.

Lobo lived his wild romantic life from 1889 to 1894 in the Currumpaw region, as the ranchmen know too well, and died, precisely as related, on January 31, 1894.

Bingo was my dog from 1882 to 1888, in spite of interruptions, caused by lengthy visits to New York, as my Manitoban friends will remember. And my old friend, the owner of Tan, will learn from these pages how his dog really died.

The Mustang lived not far from Lobo in the early nineties. The story is given strictly as it occurred, excepting that there is a dispute as to the manner of his death. According to some testimony he broke his neck in the corral that he was first taken to. Old Turkeytrack is where he cannot be consulted to settle it.

Wully is, in a sense, a compound of two dogs; both were mongrels, of some collie blood, and were raised as sheep-dogs. The first part of Wully is given as it happened, after that it was known only that he became a savage, treacherous sheep-killer. The details of the second part belong really to another, a similar yaller dog, who long lived the double-life—-a faithful sheep-dog by day, and a bloodthirsty, treacherous monster by night. Such things are less rare than is supposed, and since writing these stories I have heard of another double-lived sheep-dog that added to its night amusements the crowning barbarity of murdering the smaller dogs of the neighborhood. He had killed twenty, and hidden them in a sandpit, when discovered by his master. He died just as Wully did.

All told, I now have information of six of these Jekyll-Hyde dogs. In each case it happened to be a collie.

Redruff really lived in the Don Valley north of Toronto, and many of my companions will remember him. He was killed in 1889, between the Sugar Loaf and Castle Frank, by a creature whose name I have withheld, as it is the species, rather than the individual, that I wish to expose.

Silverspot, Raggylug, and Vixen are founded on real characters. Though I have ascribed to them the adventures of more than one of their kind, every incident in their biographies is from life.

The fact that these stories are true is the reason why all are tragic. The life of a wild animal always has a tragic end.

Such a collection of histories naturally suggests a common thought—a moral it would have been called in the last century....