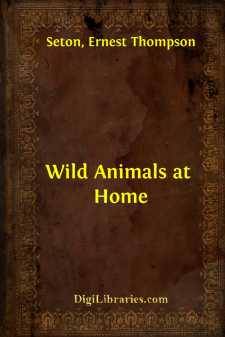 If you draw a line around the region that is, or was, known as the Wild West, you will find that you have exactly outlined the kingdom of the Coyote. He is even yet found in every part of it, but, unlike his big brother the Wolf, he never frequented the region known as Eastern America.

This is one of the few wild creatures that you can see from the train. Each time I have come to the Yellowstone Park I have discovered the swift gray form of the Coyote among the Prairie-dog towns along the River flat between Livingstone and Gardiner, and in the Park itself have seen him nearly every day, and heard him every night without exception.

Coyote (pronounced Ky-o'-tay, and in some regions Ky-ute) is a native Mexican contribution to the language, and is said to mean "halfbreed," possibly suggesting that the Coyote looks like a cross between the Fox and the Wolf. Such an origin would be a very satisfactory clue to his character, for he does seem to unite in himself every possible attribute in the mental make-up of the other two that can contribute to his success in life.

He is one of the few Park animals not now protected, for the excellent reasons, first that he is so well able to protect himself, second he is even already too numerous, third he is so destructive among the creatures that he can master. He is a beast of rare cunning; some of the Indians call him God's dog or Medicine dog. Some make him the embodiment of the Devil, and some going still further, in the light of their larger experience, make the Coyote the Creator himself seeking amusement in disguise among his creatures, just as did the Sultan in the "Arabian Nights."

The naturalist finds the Coyote interesting for other reasons. When you see that sleek gray and yellow form among the mounds of the Prairie-dog, at once creating a zone of blankness and silence by his very presence as he goes, remember that he is hunting for something to eat; also, that there is another, his mate, not far away. For the Coyote is an exemplary and moral little beast who has only one wife; he loves her devotedly, and they fight the life battle together. Not only is there sure to be a mate close by, but that mate, if invisible, is likely to be playing a game, a very clever game as I have seen it played.

Furthermore, remember there is a squealing brood of little Coyotes in the home den up on a hillside a mile or two away. Father and mother must hunt continually and successfully to furnish their daily food. The dog-towns are their game preserves, but how are they to catch a Prairie-dog! Every one knows that though these little yapping Ground-squirrels will sit up and bark at an express train but twenty feet away, they scuttle down out of sight the moment a man, dog or Coyote enters into the far distant precincts of their town; and downstairs they stay in the cyclone cellar until after a long interval of quiet that probably proves the storm to be past. Then they poke their prominent eyes above the level, and, if all is still, will softly hop out and in due course, resume their feeding....