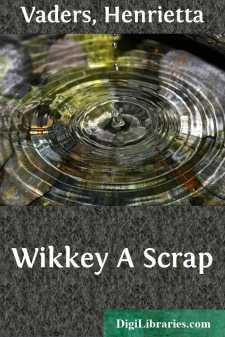 Mr. Ruskin has it that we are all kings and queens, possessing realms and treasuries. However this may be, it is certain that there are souls born to reign over the hearts of their fellows, kings walking about the world in broad-cloth and fustian, shooting-jackets, ulsters, and what not—swaying hearts at will, though it may be all unconscious of their power; and only the existence of some such psychological fact as this will account for the incident which I am about to relate.

Lawrence Granby was, beyond all doubt, one of these royal ones, his kingdom being co-extensive with the circle of his acquaintance—not that he was in the least aware of the power he exercised over all who came in contact with him, as he usually attributed the fact that he "got on" with people "like a house on fire" to the good qualities possessed by "other fellows." Even the comforts by which he was surrounded in his lodging by his landlady and former nurse, Mrs. Evans, he considered as the result of the dame's innate geniality, though the opinion entertained of her by underlings and by those who met her in the way of business was scarcely as favorable. He was a handsome fellow too, this Lawrence, six feet three, with a curly brown head and the frankest blue eyes that ever looked pityingly, almost wonderingly, on the small and weak things of the earth.

And the boy, Wikkey Whiston, was a crossing-sweeper. I am sorry for this, for I fancy people are becoming a little tired of the race, in story-books at least, but as he was a crossing-sweeper it cannot be helped. It would not mend matters much to invest him with some other profession, especially as it was while sitting broom in hand, under the lamp-post at one end of his crossing that he first saw Lawrence Granby, and if he had never seen Lawrence Granby I should not be writing about him at all.

It was a winter's morning in 1869, bright as it is possible for such a morning to be in London, but piercingly cold, and Wikkey had brushed and re-brushed the pathway—which scarcely needed it, the east wind having already done half the work—just to put some feeling of warmth into his thin frame before seating himself in his usual place beneath the lamp-post. There were a good many passers-by, for it was the time of day at which clerks and business men are on their way to their early occupation, and the boy scanned each face in the fashion that had become habitual to him in his life-long look out for coppers. Presently he saw approaching a peculiarly tall figure, and looked at it curiously, tracing its height upward from his own stunted point of view till he encountered the cheery glance of Lawrence Granby. Wikkey was strangely fascinated by the blue eyes looking down from so far above him, and scarcely knowing what he did, he rose and went shambling on alongside of the young man, his eyes riveted on his face. Lawrence, however, being almost unconscious of the boy's presence till his attention was drawn to him by the friend with whom he was walking, who said, laughing and pointing to Wikkey, "Friend of yours, eh? Seems to know you." Then he looked down again and met the curious, intent stare fixed upon him.

To which Wikkey promptly returned in the shrill, aggressively aggrieved voice of the London Arab: "I reckon it don't do you no harm, guvner; a cat may look at a king."

Lawrence laughed, and threw him a copper, saying, "You are a cheeky little fellow," and went on his way....