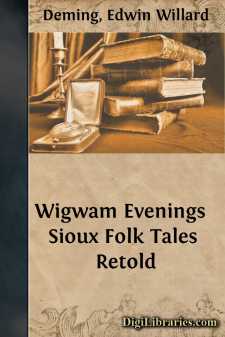 These scattered leaves from the unwritten school-book of the wilderness have been gathered together for the children of to-day; both as a slight contribution to the treasures of aboriginal folk-lore, and with the special purpose of adapting them to the demands of the American school and fireside. That is to say, we have chosen from a mass of material the shorter and simpler stories and parts of stories, and have not always insisted upon a literal rendering, but taken such occasional liberties with the originals as seemed necessary to fit them to the exigencies of an unlike tongue and to the sympathies of an alien race.

Nevertheless, we hope and think that we have been able to preserve in the main the true spirit and feeling of these old tales—tales that have been handed down by oral tradition alone through many generations of simple and story-loving people. The "Creation myths" and others rich in meaning have been treated very simply, as their symbolism is too complicated for very young readers; and much of the characteristic detail of the rambling native story-teller has been omitted. A story that to our thinking is most effectively told in a brief ten minutes is by him made to fill a long evening by dint of minute and realistic description of every stage of a journey, each camp made, every feature of a ceremony performed, and so on indefinitely. True, the attention of his unlettered listeners never flags; but our sophisticated youngsters would soon weary, we fear, of any such repetition.

There are stories here of different types, each of which has its prototype or parallel in the nursery tales of other nations. The animal fables of the philosophic red man are almost as terse and satisfying as those of Aesop, of whom they put us strongly in mind. A little further on we meet with brave and fortunate heroes, and beautiful princesses, and wicked old witches, and magical transformations, and all the other dear, familiar material of fairy lore, combined with a touch that is unfamiliar and fascinating.

The "Little Boy Man," the Adam of the Sioux, has a singular interest for us in that he is a sort of grown-up child, or a "Peter Pan" who never really grows up, and whose Eve-less Eden is a world where all the animals are his friends and killing for any purpose is unknown. Surely the red man's secret ideal must have been not war, but peace! The elements, indeed, are shown to be at war, as in the battle between Heat and Frost, or that of the mighty Thunder and the monstrous Deep; but let it be noted here that these conflicts are far more poetic and less bloody than those of Jack the Giant-killer and other redoubtable heroes of the Anglo-Saxon nursery.

The animal loves are strange—perhaps even repellent; yet our children have read of a prince who falls in love with a White Cat; in the story of "The Runaways" we come upon the old, old ruse of magic barriers interposed between pursuer and pursued; and Andersen's charming fantasy of "The Woodcutter's Child" who disobeyed her Guardian Angel has scarcely a more delicate pathos than the "Ghost Wife."

There are, to be sure, certain characters in this forest wonder-world that are purely and unmistakably Indian; yet after all Unk-to-mee, the sly one, whose adventures are endless, may be set beside quaint "Brer Fox" of Negro folk-lore, and Chan-o-te-dah is obviously an Indian brownie or gnome, while monstrous E-ya and wicked Double-Face re-incarnate the cannibal giants of our nursery days....