Why and How : a hand-book for the use of the W.C.T. unions in Canada 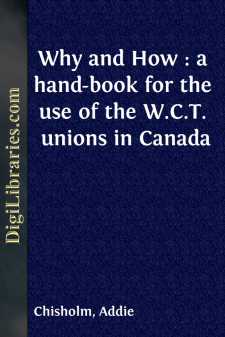 It has been said "Woman has a capacity for suffering," and during all the years of the past, in all countries and among all nations, woman has been proving this true. Since the dark day when "there stood by the cross of Jesus, his mother," and there came to that mother's heart the agony of bereavement, the human disappointment and pangs, whose torture only the Father God could understand,—from that day till the present, disappointment, trial and sorrow have entered largely into the life and experience of women. But of all clouds that have darkened their lives and among all sharp swords that have pierced their hearts, the cloud of the liquor traffic has been the darkest, and its blade the keenest. Myriads of women have looked with anguish on sacrifices offered and loved ones slain, not to save humanity or to draw men nearer to God, but destroyed at the hands of a tyrant as relentless as death, and as pitiless.

In heathen countries, children have been left to float out of existence, an offering to the gods, while the mother has turned sadly and sorrowfully away; in Christian countries, children have drifted with the tide of social customs, or inherited appetites for strong drink, out of the boundless sea of evil and wretchedness, while women have wept and wondered, have pondered and prayed.

Mothers have seen their sons, strong and brave in their young manhood, venture on this stream of rapid currents, have watched them with sad eyes, and called to them in pleading and terrified tones, as they were carried on and on by the rushing waters. At last, it was too late even for mother's love to save, and they were drawn into that terrible vortex, from which there is so seldom escape, despairing hands have reached out for help, the cry of the soul has been an appeal for mercy, and another loved one has gone down a victim to the nation's greed and a sacrifice to the nation's sin.

Out from a sheltered, sunshiny home has gone the tender, trusting daughter, in her glad girlhood, her heart all aglow with true hallowed love for him, by whose side she has chosen to spend the coming years. The future has looked so bright, as together they have thought, and planned, and built their airy castles; but the clouds have come and passed, and come again and more frequently, till, at length, the young wife has sat continually in their shadow, the brightness and the sunshine all gone out of her life, as her husband has yielded to the influence of strong drink. She has realized that she was a drunkard's wife, her place by a drunkard's side, and, with white lips and breaking heart, she has moaned out her prayer to God for deliverance. And who will say that the fond mother, sitting in the old bright home, has not felt every pang, every blow that reached the daughter's heart as she saw all that the dear one in loyalty to her husband would fain have concealed. This experience comes home to most of us, and we easily recall not one case but many in which wives and daughters have suffered at the hands of this cruel destroyer....