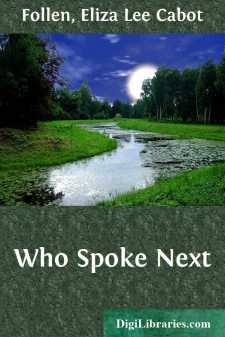 Boys are not apt to forget a promise of a story. Frank and Harry did not fail to call upon their mother for the history of the old musket.

"It appeared to me," said the mother, "that the old musket was not very willing to tell his story. He had a sort of old republican pride, and felt himself superior to the rest of the company in character and importance. When he had made himself heard in the world hitherto, it had always been by one short, but very decided and emphatic word; he despised any thing like a palaver; so he began very abruptly, and as if he had half a mind not to speak at all, because he could not speak in his own way.

"None but fools," said he, "have much to say about themselves—'Deeds, not words,' is a good motto for all. But as I would not be churlish, and as I have agreed, as well as the rest of my companions, to tell my story, I will mention what few things worth relating I can recollect.

I have no distinct consciousness, as my friend the pitcher or the curling tongs has, of what I was before the ingenuity of man brought me into my present form. I would only mention that all the different materials of which I was formed must have been perfect of their kind, or I could never have performed the duties required of me.

My first very distinct recollection is of being stood up in the way I am standing now, with a long row of my brethren, of the same shape and character as myself, as I supposed. This was in a large building somewhere in England. I, like the curling tongs, was at last packed up in a box, and brought to America, but it took a rather larger box to take me and my friends, than it took to pack up him and his friends, with all their thin straddle legs."

Creak went the curling tongs at this personal attack.

"We were brought to this country," continued the old musket, "by an Englishman. Little did he think how soon we should take part against our Fatherland, or he would have kept us at home.

One day, the elder brother of the gentleman who owned our little friend curling tongs came into the shop where I then was, and, after looking at all the muskets, selected me as one that he might trust. As he paid for me, he said to the man, "This is an argument which we shall soon have to use in defence of our liberties."

"I fear we shall," said the shopman, "and if many men are of your mind, I hope, sir, you will recommend my shop to them. I shall be happy to supply all true patriots with the very best English muskets."

My new master smiled, and took me home to his house in the country.

The family consisted of himself, his wife, and three children—two sons and a daughter. The eldest son was eighteen, the second sixteen, and the daughter fourteen. The mistress of the house turned pale when she saw my master bring me in and quietly set me down in a corner of the room behind the old clock.

Presently the two young men entered. The younger shuddered a little when he saw me, but the elder clapped his hands and exclaimed, "That's good! We have got a musket now, and the English will find out that we know how to use it!"

The boy did not give much heed to what his mother said, but took me up, examined me all over, and, after snapping my trigger two or three times, pronounced me to be a real good musket, and placed me again in the corner where his father had put me at first....