Who Are Happiest? and Other Stories 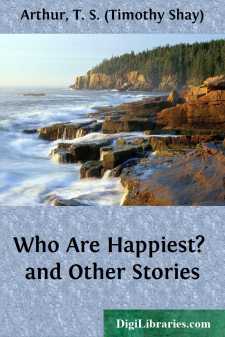 "What troubles you, William?" said Mrs. Aiken, speaking in a tone of kind concern to her husband, who sat silent and moody, with his eyes now fixed upon the floor, and now following the forms of his plainly-clad children as they sported, full of health and spirits, about the room.

It was evening, and Mr. Aiken, a man who earned his bread by the sweat of his brow, had, a little while before, returned from his daily labour.

No answer was made to the wife's question. A few minutes went by, and then she spoke again:

"Is any thing wrong with you, William?"

"Nothing more than usual," was replied. "There's always something wrong. The fact is, I'm out of heart."

Mrs. Aiken came and stood beside her husband, and laid her hand gently upon his shoulder.

The evil spirit of envy and discontent was in the poor man's heart,—this his wife understood right well. She had often before seen him in this frame of mind.

"And yet he is rolling in wealth, while I, though compelled to toil early and late, can scarcely keep soul and body together."

"Hush, William! Don't talk so. It does you no good. We have a comfortable home, with food and raiment,—let us therewith be contented and thankful."

"None are so happy as those who labour; none enjoy better health than they who have only the plainest food. Do you ever go hungry to bed, William?"

"Do you or your children shiver in the cold of winter for lack of warm clothing?"

"William! Do not look past your real comforts in envy of the blessings God has given to others. Depend upon it, we receive all of this world's goods the kind Father above sees best for us to have. With more, we might not be so happy as we are."

"I'll take all that risk," said Mr. Aiken. "Give me plenty of money, and I'll find a way to largely increase the bounds of enjoyment."

"The largest amount of happiness, I believe, is ever to be found in that condition wherein God had placed us."

"Then every poor man should willingly remain poor!"

"I did not say that, William: I think every man should seek earnestly to improve his worldly affairs—yet, be contented with his lot at all times; for, only in contentment is there happiness, and this is a blessing the poor may share equally with the rich. Indeed, I believe the poor have this blessing in larger store. You, for instance, are a happier man than Mr. Freeman."

"I am, then. Look at his face. Doesn't that tell the story? Would you exchange with him in every respect?"

"No, not in every respect. I would like to have his money."

"Ah, William! William!" Mrs. Aiken shook her head. "You are giving place in your heart for the entrance of bad spirits. Try to enjoy, fully, what you have, and you will be a far happier man than Mr. Freeman. Your sleep is sound at night."

"I know. A man who labours as hard as I do, can't help sleeping soundly."

"Then labour is a blessing, if for nothing else. I took home, to-day, a couple of aprons made for Mrs. Freeman. She looked pale and troubled, and I asked her if she were not well."