Whittier-land A Handbook of North Essex, Containing Many Anecdotes of and Poems by John Greenleaf Whittier Never Before Collected. 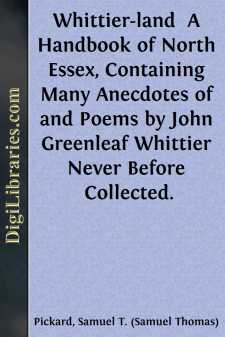 The whole valley of the Merrimac, from its source among the New Hampshire hills to where it meets the ocean at Newburyport, has been celebrated in Whittier's verse, and might well be called "Whittier-Land." But the object of these pages is to describe only that part of the valley included in Essex County, the northeastern section of Massachusetts. The border line separating New Hampshire from the Bay State is three miles north of the river, and follows all its turnings in this part of its course. For this reason each town on the north of the Merrimac is but three miles in width. It was on this three-mile strip that Whittier made his home for his whole life. His birthplace in Haverhill was his home for the first twenty-nine years of his life. He lived in Amesbury the remaining fifty-six years. The birthplace is in the East Parish of Haverhill, three miles from the City Hall, and three miles from what was formerly the Amesbury line. It is nearly midway between the New Hampshire line and the Merrimac River. In 1876 the township of Merrimac was formed out of the western part of Amesbury, and this new town is interposed between the two homes, which are nine miles apart.

Haverhill, Merrimac, Amesbury, and Salisbury are each on the three-mile-wide ribbon of land stretching to the sea, on the left bank of the river. On the opposite bank are Bradford, Groveland, Newbury, and Newburyport. The whole region on both sides of the river abounds in beautifully rounded hills formed of glacial deposits of clay and gravel, and they are fertile to their tops. At many points they press close to the river, which has worn its channel down to the sea-level, and feels the influence of the tides beyond Haverhill. This gives picturesque effects at many points. The highest of the hills have summits about three hundred and sixty feet above the surface of the river, and there are many little lakes and ponds nestling in the hollows in every direction. In the early days these hills were crowned with lordly growths of oak and pine, and some of them still retain these adornments. But most of the summits are now open pastures or cultivated fields. The roofs and spires of prosperous cities and villages are seen here and there among their shade trees, and give a human interest to the lovely landscape. It is not surprising that Whittier found inspiration for the beautiful descriptive passages which occur in every poem which has this river for theme or illustration:—

"Stream of my fathers! sweetly stillThe sunset rays thy valley fill;Poured slantwise down the long defile,Wave, wood, and spire beneath them smile." RIVER PATH

Here is a description of the scenery of the Merrimac valley by Mr. Whittier himself, in a review of Rev. P. S. Boyd's "Up and Down the Merrimac," written for a journal with which I was connected, and never reprinted until now:—

"The scenery of the lower valley of the Merrimac is not bold or remarkably picturesque, but there is a great charm in the panorama of its soft green intervales: its white steeples rising over thick clusters of elms and maples, its neat villages on the slopes of gracefully rounded hills, dark belts of woodland, and blossoming or fruited orchards, which would almost justify the words of one who formerly sojourned on its banks, that the Merrimac is the fairest river this side of Paradise....