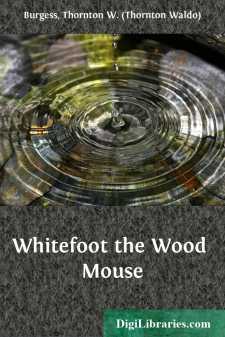 In all his short life Whitefoot the Wood Mouse never had spent such a happy winter. Whitefoot is one of those wise little people who never allow unpleasant things of the past to spoil their present happiness, and who never borrow trouble from the future. Whitefoot believes in getting the most from the present. The things which are past are past, and that is all there is to it. There is no use in thinking about them. As for the things of the future, it will be time enough to think about them when they happen.

If you and I had as many things to worry about as does Whitefoot the Wood Mouse, we probably never would be happy at all. But Whitefoot is happy whenever he has a chance to be, and in this he is wiser than most human beings. You see, there is not one of all the little people in the Green Forest who has so many enemies to watch out for as has Whitefoot. There are ever so many who would like nothing better than to dine on plump little Whitefoot. There are Buster Bear and Billy Mink and Shadow the Weasel and Unc' Billy Possum and Hooty the Owl and all the members of the Hawk family, not to mention Blacky the Crow in times when other food is scarce. Reddy and Granny Fox and Old Man Coyote are always looking for him.

So you see Whitefoot never knows at what instant he may have to run for his life. That is why he is such a timid little fellow and is always running away at the least little unexpected sound. In spite of all this he is a happy little chap.

It was early in the winter that Whitefoot found a little hole in a corner of Farmer Brown's sugar-house and crept inside to see what it was like in there. It didn't take him long to decide that it was the most delightful place he ever had found. He promptly decided to move in and spend the winter. In one end of the sugar-house was a pile of wood. Down under this Whitefoot made himself a warm, comfortable nest. It was a regular castle to Whitefoot. He moved over to it the store of seeds he had laid up for winter use.

Not one of his enemies ever thought of visiting the sugar-house in search of Whitefoot, and they wouldn't have been able to get in if they had. When rough Brother North Wind howled outside, and sleet and snow were making other little people shiver, Whitefoot was warm and comfortable. There was all the room he needed or wanted in which to run about and play. He could go outside when he chose to, but he didn't choose to very often. For days at a time he didn't have a single fright. Yes indeed, Whitefoot spent a happy winter.

Whitefoot had spent the winter undisturbed in Farmer Brown's sugar-house. He had almost forgotten the meaning of fear. He had come to look on that sugar-house as belonging to him. It wasn't until Farmer Brown's boy came over to prepare things for sugaring that Whitefoot got a single real fright. The instant Farmer Brown's boy opened the door, Whitefoot scampered down under the pile of wood to his snug little nest, and there he lay, listening to the strange sounds....