White Slaves; or, the Oppression of the Worthy Poor 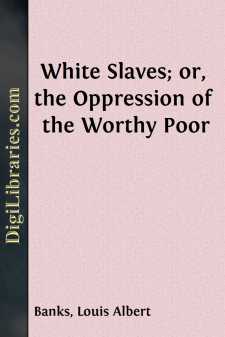 THE WHITE SLAVES OF THE BOSTON "SWEATERS".

"Hard work is good an' wholesome, past all doubt;  But 'tain't so, ef the mind gits tuckered out."

A wise man of the old time, after a tour of observation, came home to say, "So I returned, and considered all the oppressions that are done under the sun: and behold the tears of such, as were oppressed, and they had no comforter; and on the side of their oppressors there was power; but they had no comforter." If this report had been written by one who had been climbing with me through the tenement houses of not less than a score of Boston streets, conversing with the sewing-women, looking on their poverty-lined faces and their ragged children, breathing the poisonous air of the quarters where they work, and listening to their heart-rending stories of cruelty and oppression, it would be an appropriate summary of our observation. It is my purpose, at this time, to take you with me on a tour of observation. As well-lighted streets are better than policemen to insure safety and good order, so I believe that the best possible service I can render the public is to turn on the light, and tell, as plainly and simply as I can, the story of what I have seen and heard and smelled in the white slave-quarters, which are a disgrace to our fair city. I shall confine myself at this time entirely to the work of women and children in their own homes. Most of this work is parcelled out to them by middlemen who are known as "sweaters." That word sweater is not in the old dictionaries. It is a foul word, born of the greed and infernal lust for gold which pervade the most reckless and wicked financial circles of our time. The sweater takes large contracts and divides it out among the very poor, reducing the price to starvation limits, and reserving the profits for himself.

Some of the women whose story I shall tell do not work for sweaters, but are treated almost as badly by the powerful and wealthy firms who employ them. In these cases the firm itself has learned the sweater's secret, and through an agent of its own is sweating the life-blood out of these half-starved victims.

Let us begin near at home with a South Boston case, which came to my notice through the dispensary doctor for the district. It is a widow with one child—a little boy scarcely three years old. The child is just recovering from a troublesome sickness, through which the doctor became acquainted with her. She has been sewing for a good while for one of the largest and most respectable dry-goods houses on Washington Street—a firm whose name is a household word throughout New England. Her sewing has been confined to two lines—cloaks and aprons. For some time she has been making white aprons—a good long apron, requiring a yard, perhaps, of material; it is hemmed across the bottom and on both sides, the band or "apron string" is hemmed on both sides, and then sewed on to the apron, making six long seams. For these she is paid fifteen cents a dozen! And besides that, this great, rich firm, whose members are rolling in wealth and luxury, charges this poor widow fifteen cents expressage on her package of ten dozen aprons, so that for making one hundred and twenty aprons, such as I have described, she receives, net, one hundred and thirty-five cents!...