White Lilac; or the Queen of the May 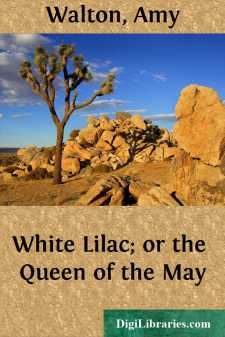 A Bunch of Lilac.

Mrs James White stood at her cottage door casting anxious glances up at the sky, and down the hill towards the village. If it were fine the rector’s wife had promised to come and see the baby, “and certainly,” thought Mrs White, shading her eyes with her hand, “you might call it fine—for April.” There were sharp showers now and then, to be sure, but the sun shone between whiles, and sudden rays darted through her little window strong enough to light up the whole room. Their searching glances disclosed nothing she was ashamed of, for they showed that the kitchen was neat and well ordered, with bits of good substantial furniture in it, such as a long-bodied clock, table, and dresser of dark oak. These polished surfaces smiled back again cheerfully as the light touched them, and the row of pewter plates on the high mantelshelf glistened so brightly that they were as good as so many little mirrors. But beside these useful objects the sunlight found out two other things in the room, at which it pointed its bright finger with special interest. One of these was a large bunch of pure white lilac which stood on the window sill in a brown mug, and the other was a wicker cradle in which lay something very much covered up in blankets. After a last lingering look down the hill, where no one was in sight, Mrs White shut her door and settled herself to work, with the lilac at her elbow, and the cradle at her foot. She rocked this gently while she sewed, and turned her head now and then, when her needle wanted threading, to smell the delicate fragrance of the flowers. Her face was grave, with a patient and rather sad expression, as though her memories were not all happy ones; but by degrees, as she sat there working and rocking, some pleasant thought brought a smile to her lips and softened her eyes. This became so absorbing that presently she did not see a figure pass the window, and when a knock at the door followed, she sprang up startled to open it for her expected visitor.

It was not want of cordiality but want of breath which caused a beaming smile to be the only reply to this welcome. The hill was steep, the day was mild, and Mrs Leigh was rather stout. She at once dropped with a sigh of relief, but still smiling, into a chair, and cast a glance full of interest at the cradle, which Mrs White understood as well as words. Bending over it she peeped cautiously in amongst the folds of flannel.

Mrs Leigh had now recovered her power of speech. “Don’t disturb her for the world,” she said, “I’m not going away yet. I shall be glad to rest a little. She’ll wake presently, I dare say. What is it,” she continued, looking round the room, “that smells so delicious? Oh, what lovely lilac!” as her eye rested on the flowers in the window....