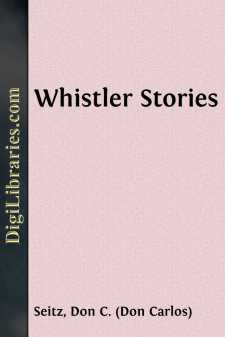 The studios of Chelsea are full of Whistler anecdotes. One tells of a female model to whom he owed some fifteen shillings for sittings. She was a Philistine of the Philistines who knew nothing of her patron's fame and was in no way impressed with his work. One day she told another artist that she had been sitting to a little Frenchman called Whistler, who jumped about his studio and was always complaining that people were swindling him, and that he was making very little money. The artist suggested that if she could get any piece of painting out of Whistler's studio he would give her ten pounds for it. Although skeptical, the model decided to tell her "little Frenchman" of this too generous offer, and selected one of the biggest and finest works in the studio. "What did he say?" asked the artist who had made the offer, when the model appeared in a state of great excitement and looking almost as if she had come second best out of a scrimmage. "He said, 'Ten pounds—Good heavens!—ten pounds!' and he got so mad—well, that's how I came in here like this."

Mr. W.P. Frith, R.A., following the custom of artists, talked to a model one day to keep her expression animated. He asked the girl to whom she had been sitting of late, and received the answer:

"He asked me who I'd been sitting to before that, and I said Mr.Horsley."

Whistler once came very near painting a portrait of Disraeli. He had the commission; he even went down to the country where Disraeli was; but the great man did not manage to get into the mood. Whistler departed disappointed, and shortly afterward took place a meeting in Whitehall which was the occasion of a well-known story: Disraeli put his arm in Whistler's for a little way on the street, bringing from the artist the exclamation, "If only my creditors could see!"

Whistler's ideas, the reverse of commercial, not infrequently placed him in want. He pawned his portrait of his mother, by many considered the best of his productions.

Miss Marion Peck, a niece of Ferdinand Peck, United States Commissioner to the Paris Exposition, wanted her portrait done by Whistler. She sat for him nineteen times. Further, she requested, as the picture was nearing completion, that extra pains be taken with its finishing. Also, she inquired if it could, without danger of injury, be shipped.

"Because I wish to send it to my home in Chicago," explained MissPeck.

Whistler threw down his brush, overturned the easel, and ran around the studio like a madman. "What!" he shrieked. "Send a Whistler to Chicago! Allow one of my paintings to enter Hog Town!...