While the Billy Boils 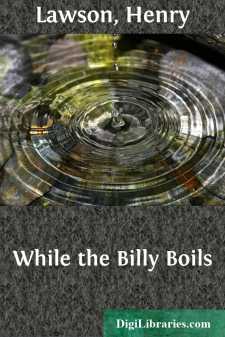 AN OLD MATE OF YOUR FATHER'S

You remember when we hurried home from the old bush school how we were sometimes startled by a bearded apparition, who smiled kindly down on us, and whom our mother introduced, as we raked off our hats, as "An old mate of your father's on the diggings, Johnny." And he would pat our heads and say we were fine boys, or girls—as the case may have been—and that we had our father's nose but our mother's eyes, or the other way about; and say that the baby was the dead spit of its mother, and then added, for father's benefit: "But yet he's like you, Tom." It did seem strange to the children to hear him address the old man by his Christian name—-considering that the mother always referred to him as "Father." She called the old mate Mr So-and-so, and father called him Bill, or something to that effect.

Occasionally the old mate would come dressed in the latest city fashion, and at other times in a new suit of reach-me-downs, and yet again he would turn up in clean white moleskins, washed tweed coat, Crimean shirt, blucher boots, soft felt hat, with a fresh-looking speckled handkerchief round his neck. But his face was mostly round and brown and jolly, his hands were always horny, and his beard grey. Sometimes he might have seemed strange and uncouth to us at first, but the old man never appeared the least surprised at anything he said or did—they understood each other so well—and we would soon take to this relic of our father's past, who would have fruit or lollies for us—strange that he always remembered them—and would surreptitiously slip "shilluns" into our dirty little hands, and tell us stories about the old days, "when me an' yer father was on the diggin's, an' you wasn't thought of, my boy."

Sometimes the old mate would stay over Sunday, and in the forenoon or after dinner he and father would take a walk amongst the deserted shafts of Sapling Gully or along Quartz Ridge, and criticize old ground, and talk of past diggers' mistakes, and second bottoms, and feelers, and dips, and leads—also outcrops—and absently pick up pieces of quartz and slate, rub them on their sleeves, look at them in an abstracted manner, and drop them again; and they would talk of some old lead they had worked on: "Hogan's party was here on one side of us, Macintosh was here on the other, Mac was getting good gold and so was Hogan, and now, why the blanky blank weren't we on gold?" And the mate would always agree that there was "gold in them ridges and gullies yet, if a man only had the money behind him to git at it." And then perhaps the guv'nor would show him a spot where he intended to put down a shaft some day—the old man was always thinking of putting down a shaft. And these two old fifty-niners would mooch round and sit on their heels on the sunny mullock heaps and break clay lumps between their hands, and lay plans for the putting down of shafts, and smoke, till an urchin was sent to "look for his father and Mr So-and-so, and tell 'em to come to their dinner."

And again—mostly in the fresh of the morning—they would hang about the fences on the selection and review the live stock: five dusty skeletons of cows, a hollow-sided calf or two, and one shocking piece of equine scenery—which, by the way, the old mate always praised....