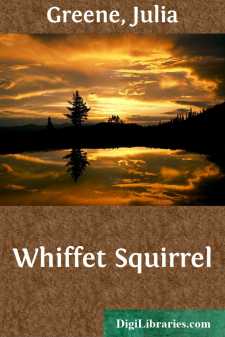 Whiffet, Skiffet and Skud were three little red squirrels who lived with their father and mother in a tiny brown house in the old chestnut tree. First, I must tell you how the Squirrel family came to live in this dear little house. You see it happened this way. Father and Mother Squirrel started out very early one morning in the spring, to hunt a new home as they did not feel safe any longer living under the old pine stump, with the children getting large enough to run about. They both scampered up the old chestnut tree at the back of the farm house to see if they could find a nice deep hollow that would make a safe home for their little ones. When Mother Squirrel had gone about half way up the tree trunk, and as she climbed around a big limb, she almost bumped her head against what seemed to be a brownish wall. She peeped around the corner of the brownish wall and what do you suppose she saw? She held her breath in rapture for there before her bright little eyes sat the cutest little brown house resting right on the big limb. It was far more wonderful than any home that she had ever dreamed of. It had a sloping red roof and two little round doors. A good sized porch jutted out in front and each little door was several inches above the porch. Mother Squirrel very cautiously placed her two front feet on the porch and listened intently but all was very quiet. Of course the folks who owned the house might be still asleep or they might be away. She crept quietly to the first little round door and peeped in. She saw a cute little room entirely empty. “The family must be away” she thought. Boldly she peeped in through the second little door and saw another cute little room just like the first and also empty. Then she walked in and explored both rooms and found a sort of cubby hole closet at the back of each. “What a fine place for storing nuts,” said Mother Squirrel to herself, “but it would be much handier with a door between the two rooms.” Then she walked out on the porch and looked around. The little house was shut in almost completely by the thick green leaves except for a patch of blue sky that showed above the roof. “I wonder who this little house belongs to” thought Mother Squirrel to herself with an envious sigh. Just then she looked up at the patch of blue sky and her bright eyes caught sight of a small sign on the peak of the roof which she had not noticed before. On the sign were printed the words “FOR RENT” in bright red letters.

When Mother Squirrel saw the sign “FOR RENT” she nearly fell backwards off the porch in her joy and excitement. She began to chatter and scream in a loud shrill voice which brought her husband scampering to the spot at top speed. Father Squirrel was quite as excited and delighted over the house as was his wife. “It was surely meant for us” he said; “we’ll move in at once. You’d better stay here, my dear, in case anyone should come along while I go back to the old stump for the children and our things. I had better get the moving done before many people are out.” Off he scampered and Mother Squirrel began at once to plan her housekeeping arrangements and started to gnaw a door between the two rooms with her sharp little teeth. As she was working busily at her task a shadow fell across the door and she heard a strange chirping voice say: “My love, I am sure this is just the place we’ve been looking for.” Her heart began to beat violently with alarm. Peeping through the door she saw two large fat Newly-wed Robins standing on the porch in an affectionate attitude gazing admiringly up at the house. “The nerve of some people” thought Mother Squirrel, shaking with indignation. “They seem to think it’s a bird house. It’s that ‘FOR RENT’ sign. The idea of their talking about our house like that! But I’ll fix them.” Mother Squirrel poked her head out of the little round door very suddenly and glaring with a very fierce expression, she exclaimed in a loud voice: “THE CAT’S COMING”!

The Newly-wed Robins both turned very pale and flew—I think they’re flying yet. Mother Squirrel chuckled to herself but decided to take no more risks so she climbed up the roof and took down the “FOR RENT” sign.

Soon Father Squirrel and the children Whiffet, Skiffet and Skud, each carrying a bag came scampering up the tree trunk. Mother Squirrel made them nearly die laughing when she told them how she had frightened the Newly-wed Robins.

Then Father Squirrel turned the “FOR RENT” sign over and painted on the other side the words “NO TRESPASSING” and placed it on the corner of the porch.

This is how the Squirrel family found their new home but I will tell you something that they do not even suspect. The little brown house is a bird house built by Tom the farmer’s son for his little sister Polly.

The thickening leaves had hidden it from view and little Polly had forgotten all about it.

Whiffet, Skiffet and Skud led a jolly life in the old chestnut tree. They played from the topmost branch to the lowest limb but Mother Squirrel would not let them go down the tree trunk to the ground for fear of cats. Whiffet Squirrel the tiniest of the three could think of more mischief than her two big brothers Skiffet and Skud put together. She was not afraid of anything and was always bossing her brothers and leading them into trouble.

One morning early she ran out on the large limb on which the little brown house rested and found that it almost reached to one of the windows of the farmhouse....