Where We Live A Home Geography 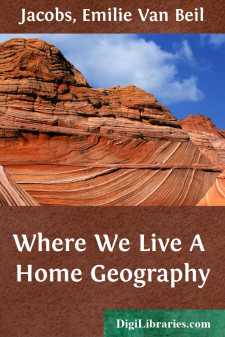 Once upon a time as four blind men sat by the roadside they heard the tramp of an elephant’s feet, and said one to another, “Here comes an elephant; now we shall know what he is like.” The first blind man put out his hand and touched the elephant’s broad side. The second took hold of a leg. The third grasped a tusk, and the fourth clutched the animal’s tail.

“Now do you know what an elephant looks like?” asked a friend.

“Yes,” cried the first. “The elephant is broad and flat like a barn door.”

“What!” exclaimed the second. “The elephant is big and round like the trunk of a tree.”

“Not so!” cried the third. “The elephant is hard and smooth like a polished stone.”

“What are you all talking about?” cried the fourth. “The elephant is just like a piece of rope.”

Much so-called teaching of geography leads to just such incomplete and fantastic ideas about geographical concepts. Very many children have only vague, incomplete and incorrect conceptions of the things they see. Like these physically and mentally blind men we are too often satisfied with mere wordy descriptions of subjects when we might study the subject at first hand if we would.

This little book is intended to prevent the giving of information by description, but to suggest ways of directing attention to those things which lie within reach of the child’s senses, things which he might pass by, things which are needed now to stimulate an intelligent interest in his surroundings, things which are needed later for an appreciation and enjoyment of his study of the larger facts and concepts of geography. If the larger geographical concepts are to have accuracy and richness for the child he must have his attention directed to his surroundings. The trite expression [p6] “from the known to the unknown” is good pedagogy, but there must be a “known” on which to build.

The book is based upon the author’s actual experience in the class-room studying the children at their geography tasks. It has been her experience that the efforts of the teachers to build broad geographical concepts were of no avail because the pupils did not have accurate intimate knowledge of the necessary home geography upon which to build. To correct this defect she set about collecting and classifying the necessary material. With the use of this material she not only found that the class teachers had much less difficulty in presenting the study of the earth as a whole, but that an interest beyond all expectation was apparent in the children.

The following pages are valuable more on account of the things they suggest than for any geographical facts which they incidentally present. The book is not a text-book on geography; it is a compendium of suggestion on the study of the subject. It makes little effort to present facts, but rather it tells how to gather, classify and study facts. It is intended to be used with children during the age when they especially delight in the making of collections, and is intended to turn to a definite use this childish instinct....