Where the Sabots Clatter Again 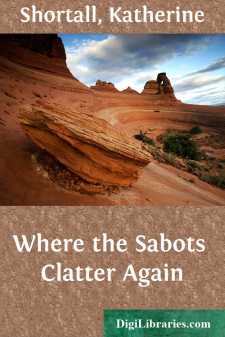 THE BRIDE OF NOYON.

A returning flush upon the plain. Streaks of color across a mangled landscape: the gentle concealment of shell hole and trench. This is what one saw, even in the summer of 1919. For the sap was running, and a new invasion was occurring. Legions of tender blades pushed over the haggard No Man's Land, while reckless poppies scattered through the ranks of green, to be followed by the shyer starry sisters in blue and white. Irrepressibly these floral throngs advanced over the shell torn spaces, crowding, mingling and bending together in a rainbow riot beneath the winds that blew them. They were the vanguard.

In the midst of the reviving fields lay Noyon: Noyon, that gem of the Oise, whose delicate outline of spires and soft tinted roofs had graced the wide valley for centuries. Today the little city lay blanched and shapeless between the hills, as all towns were left that stood in the path of the armies. The cathedral alone reared its battered bulk in the midst; a resisting pile, its two grim and blunted towers frowning into the sky. Nobly Gothic through all the shattering, the great church rose out of the wreckage, with flying buttresses still outspread like brooding wings to the dead houses that had sunk about her.

But Noyon was not dead. We of the Red Cross knew that. We knew that in cellars and nooks of this labyrinth of ruin already hundreds of hearts were beating. On this calm September morning the newly cleared streets resounded with the healthful music of hammer and saw, and cartwheels rattled over the cobblestones, while workmen called to each other in resonant voices. Pregnant sounds, these, the significance of which we could estimate. For we had seen Noyon in the early months of the armistice: tangled and monstrous in her attitude of falling, and silent with the bleeding silence of desertion. Then, one memorable day, the stillness had been broken by the first clatter of sabots—that wooden noise, measured, unmistakable, approaching. Two pairs of sabots and a long road. Two broad backs bent under bulging loads; an infant's wail; a knock at the Red Cross Door—but that was nearly eight months before.

The Poste de Secours was closed for the first time since Madame de Vigny and her three young infirmières had come to Noyon. Two women stood without, one plump and bareheaded, the other aged and bent, with a calico handkerchief tied over her hair. They stared at the printed card tacked upon the entrance of the large patched-up house that served as Headquarters for the French Red Cross.

"Tiens! c'est fermé," exclaimed Madame Talon, shaking the rough board door with all her meagre weight, "and I have walked eight kilometers to get a jupon, and with rheumatism, too."

"Haven't you heard the news?" asked her companion with city-bred scorn.

"Ah? What news?" The crisp old face crinkled with anticipation.

"Why, Mademoiselle Gaston is to be married today."

"Tiens, tiens! est-ce possible? What happiness for that good girl!" and Madame Talon, forgetful of the loss of her jupon, smiled a wrinkled smile till her nose nearly touched her chin, and her eyes receding into well worn little puckers, became two snapping black points....