Where the Blue Begins 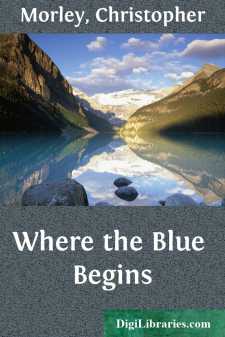 Gissing lived alone (except for his Japanese butler) in a little house in the country, in that woodland suburb region called the Canine Estates. He lived comfortably and thoughtfully, as bachelors often do. He came of a respectable family, who had always conducted themselves calmly and without too much argument. They had bequeathed him just enough income to live on cheerfully, without display but without having to do addition and subtraction at the end of the month and then tear up the paper lest Fuji (the butler) should see it.

It was strange, since Gissing was so pleasantly situated in life, that he got into these curious adventures that I have to relate. I do not attempt to explain it.

He had no responsibilities, not even a motor car, for his tastes were surprisingly simple. If he happened to be spending an evening at the country club, and a rainstorm came down, he did not worry about getting home. He would sit by the fire and chuckle to see the married members creep away one by one. He would get out his pipe and sleep that night at the club, after telephoning Fuji not to sit up for him. When he felt like it he used to read in bed, and even smoke in bed. When he went to town to the theatre, he would spend the night at a hotel to avoid the fatigue of the long ride on the 11:44 train. He chose a different hotel each time, so that it was always an Adventure. He had a great deal of fun.

But having fun is not quite the same as being happy. Even an income of 1000 bones a year does not answer all questions. That charming little house among the groves and thickets seemed to him surrounded by strange whispers and quiet voices. He was uneasy. He was restless, and did not know why. It was his theory that discipline must be maintained in the household, so he did not tell Fuji his feelings. Even when he was alone, he always kept up a certain formality in the domestic routine. Fuji would lay out his dinner jacket on the bed: he dressed, came down to the dining room with quiet dignity, and the evening meal was served by candle-light. As long as Fuji was at work, Gissing sat carefully in the armchair by the hearth, smoking a cigar and pretending to read the paper. But as soon as the butler had gone upstairs, Gissing always kicked off his dinner suit and stiff shirt, and lay down on the hearth-rug. But he did not sleep. He would watch the wings of flame gilding the dark throat of the chimney, and his mind seemed drawn upward on that rush of light, up into the pure chill air where the moon was riding among sluggish thick floes of cloud. In the darkness he heard chiming voices, wheedling and tantalizing. One night he was walking on his little verandah. Between rafts of silver-edged clouds were channels of ocean-blue sky, inconceivably deep and transparent. The air was serene, with a faint acid taste. Suddenly there shrilled a soft, sweet, melancholy whistle, earnestly repeated. It seemed to come from the little pond in the near-by copses. It struck him strangely....