Where No Fear Was 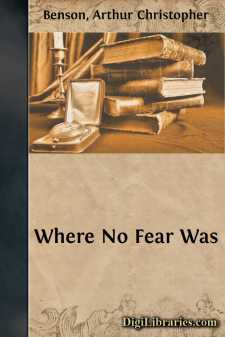 There surely may come a time for each of us, if we have lived with any animation or interest, if we have had any constant or even fitful desire to penetrate and grasp the significance of the strange adventure of life, a time, I say, when we may look back a little, not sentimentally or with any hope of making out an impressive case for ourselves, and interrogate the memory as to what have been the most real, vivid, and intense things that have befallen us by the way. We may try to separate the momentous from the trivial, and the important from the unimportant; to discern where and how and when we might have acted differently; to see and to say what has really mattered, what has made a deep mark on our spirit; what has hampered or wounded or maimed us. Because one of the strangest things about life seems to be our incapacity to decide beforehand, or even at the time, where the real and fruitful joys, and where the dark dangers and distresses lie. The things that at certain times filled all one's mind, kindled hope and aim, seemed so infinitely desirable, so necessary to happiness, have faded, many of them, into the lightest and most worthless of husks and phantoms, like the withered flowers that we find sometimes shut in the pages of our old books, and cannot even remember of what glowing and emotional moment they were the record!

How impossible it is ever to learn anything by being told it! How necessary it is to pay the full price for any knowledge worth having! The anxious father, the tearful mother, may warn the little boy before he goes to school of the dangers that await him. He does not understand, he does not attend, he is looking at the pattern of the carpet, and wondering for the hundredth time whether the oddly-shaped blue thing which appears and reappears at intervals is a bird or a flower—yes, it is certainly meant for a bird perched on a bough! He wishes the talk were over, he looks at the little scar on his father's hand, and remembers that he has been told that he cut it in a cucumber-frame when he was a boy. And then, long afterwards perhaps, when he has made a mistake and is suffering for it, he sees that it was THAT of which they spoke, and wonders that they could not have explained it better.

And this is so all along! We cannot recognise the dark tower, to which in the story Childe Roland came, by any description. We must go there ourselves; and not till we feel the teeth of the trap biting into us, do we see that it was exactly in such a place that we had been warned that it would be laid.

There is an episode in that strange and beautiful book Phantastes, by George Macdonald, which comes often to my mind. The boy is wandering in the enchanted forest, and he is told to avoid the house where the Daughter of the Ogre lives. His morose young guide shows him where the paths divide, and he takes the one indicated to him with a sense of misgiving.

A little while before he had been deceived by the Alder-maiden, and had given her his love in error....