When the Birds Begin to Sing 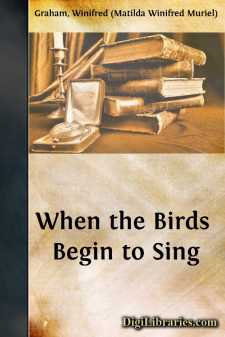 CHAPTER I. AND WHEN LOVE SPEAKS.

She was certainly very pretty, and just then she looked prettier than usual, for the sharp run had brought a more vivid colour to the cheek, and an added sparkle to the eye. She was laughing, too—the rogue—as well she might, for had she not brought her right hand swiftly down upon his left ear when he had chased her, caught her, and deliberately and maliciously kissed her, and did he not now look red and foolish, and apparently repentant?

But let me start from the beginning, and tell you how it all came about.

Eleanor, the daughter of a neighbouring farmer, is as fresh and beautiful in the eyes of Philip Roche as the field flowers whose heads fall fading beneath his tread while he follows her through the long grass. He has watched her playing with the innocent school children—little more than a child herself—and then, with the calm assurance that to him is second nature, joins the merry throng unasked. The children greet him eagerly, after scrambling for a handful of silver from the stranger's pocket, for is it not the great, grand treat of all the year?

"Come and play wif us," lisps a little maiden of five summers, whom Philip tosses on his shoulder with good-natured ease. He has a way of winning the confidence of children.

"Kiss in the ring!" cries a small boyish voice at his elbow.

The stranger's eyes twinkle as he watches the lovely unknown Eleanor arranging a circle. Placing his tiny friend again on her feet, and taking her brother's grimy hand, Philip Roche joins the hilarious pastime.

Eleanor glances across the ring well-pleasedly, guessing that her dainty figure and deep-fringed eyes have attracted him thither.

A moment later she trips lightly round the chain of children, her heart beating higher as her feet approach the man's tall figure. Shall she? Shall she? No time to consider, as the handkerchief falls from her hand upon Philip's shoulder.

Quick as lightning she flies away—faster—faster—through the buttercups, while he pursues, nearer—nearer—and then the strong arms arrest her career, and the inevitable kiss occurs.

Eleanor, her cheeks aflame, frees herself from his audacious caress, and half laughing, half indignant, walks hastily away. But after their unconventional introduction Philip is not easily to be foiled.

"You are offended," he cries penitently. "It was only the game; won't you forgive me, Miss——?"

"Grebby," raising her eyes and pausing. "Eleanor Grebby," she continues with a prim little air that is quite unnatural, then laughing spontaneously:

"Roche—Philip Roche, at your service."

"So now we know each other," holding out her hand.

He grasps it eagerly—such a warm slim hand!

"It was rather a nice introduction, wasn't it?"

Philip thinks how amazingly pretty Eleanor is, as she assents with deepening colour.

"There! I knew it would come!" she cries, with a thought for her new poppy-bedizened hat.

"What?" asks Philip, still feasting his eyes on the girl's fair physique, and unobservant of the gathering darkness overhead....