When Life Was Young At the Old Farm in Maine 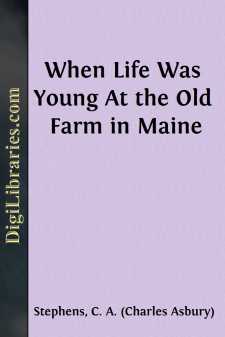 THE FARM ON THE PENNESSEEWASSEE

Away down East in the Pine Tree State, there is a lake dearer to my heart than all the other waters of this fair earth, for its shores were the scenes of my boyhood, when Life was young and the world a romance still unread.

Dearer to the heart;—for then glowed that roseate young joy and faith in life and its grand possibilities; that hope and confidence that great things can be done and that the doing of them will prove of high avail. For such is ever our natural, normal first view of life; the clear young brain's first vision of this wondrous bright universe of earth and sky; the first picture on the sentient plate of consciousness, and the true one, before error blurs and evil dims it; a joy and a faith in life which as yet, on this still imperfect earth of ours, comes but once, with youth.

The white settlers called it the Great Pond; but long before they came to Maine, the Indians had named it Pennesseewassee, pronounced Penny-see-was-see, the lake-where-the-women-died, from the Abnaki words, penem-pegouas-abem, in memory, perhaps, of some unhistoric tragedy.

From their villages on the upper Saco waters, the Pequawkets were accustomed to cross over to the Androscoggin and often stopped at this lake, midway, to fish in the spring, and again in winter to hunt for moose, then snowbound in their "yards." On snowshoes, or paddling their birch canoes along the pine-shadowed streams, these tawny, pre-Columbian warriors came and camped on the Pennesseewassee; we still pick up their flint arrow-heads along the shore; and it may even be that the short, brown Skraellings were here before them, in neolithic days.

There are two ponds, or lakes, of this name, the Great and the Little Pennesseewassee, the latter lying a mile and a half to the west of the larger expanse and connected with it by a brook.

To the northeast, north and west, the land rises in long, picturesque ridges and mountains of medium altitude; and still beyond and above these, in the west and northwest, loom Mt. Washington, Madison, Kearsarge and other White Mountain peaks.

The larger lake is a fine sheet of water, five miles in length, containing four dark-green islets; and the view from its bosom is one of the most beautiful in this our State-of-Lakes.

Hither, shortly after the "Revolution," came the writer's great-grandfather, poor in purse; for he had served throughout that long, and at times hopeless struggle for liberty. In payment he had received a large roll of "Continental Money," all of which would at that time have sufficed, scarcely, to procure him a tavern dinner. No "bounties," no "pensions," then stimulated the citizen soldiery. With little to aid him save his axe on his shoulder, the unremunerated patriot made a clearing on the slopes, looking southward upon the lake; and here, after some weeks, or months, of toil, he brought his young family, consisting of my great-grandmother and two children. They came up the lake in a skiff, fashioned from a pine log. Landing on a still remembered rock, it is said that the ex-soldier turned about, and taking the roll of Continental scrip from his pocket, threw it far out into the water, exclaiming,—

"So much for soldiering!...