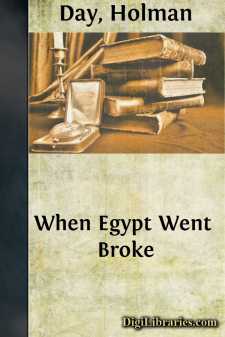 Tasper Britt arose in the gray dawn, as usual.

Some fishermen, seeking bait, stay up late and "jack" angleworms with a bull's-eye light. The big worms are abroad on the soil under cover of the darkness. Other fishermen get up early and dig while the dew is holding the smaller worms near the surface of the ground; in going after worms the shrewd operator makes the job easy for himself.

Tasper Britt—"Twelve-per-cent Britt"—trimmed his slumber at both ends—was owl and early bird, both, in his pursuit of the pence of the people, and got 'em coming and going.

He was the money boss for the town of Egypt, and those who did not give him his per cent nickname called him "Phay-ray-oh"—but behind his back, of course. To his face his debt slaves bespoke his favor obsequiously. Seeing that nearly every "Egyptian" with collateral owed him money, Mr. Britt had no fault to find with his apparent popularity. He did believe, complacently, that he was popular. A man who was less sure of himself would not have dared to appear out, all at once, with his beard dyed purple-black and with a scratch wig to match. Men gasped when they came into his office in Britt Block, but men held their faces measurably under control even though their diaphragms fluttered; the need of renewing a note—paying a bonus for the privilege—helped supplicants to hold in any bubbling hilarity. Therefore, Mr. Britt continued to be assured that he was pretty generally all right, so far as the folks of Egypt were concerned.

Mr. Britt dyed after Hittie died. That was when he was past sixty-five.

It was only the familiar, oft-repeated instance of temperament being jounced out of a lifelong rut by a break in wedlock relations.

Hittie was his yoke-mate, pulling hard at his side with wages of food and drink. The two of them kept plodding steadily in the dry and rocky road all the years, never lifting their eyes to look over into pastures forbidden. Perhaps if Hittie had been left with the money, after the yoke had been sundered, she would have kicked up her heels in a few final capers of consolation, in order to prove to herself, by brief experience, how much better consistent sainthood was as a settled state.

In view of such a possibility—and widows are not altogether different from widowers—it was hardly fair in the folks of Egypt to twist every act of Widower Britt to his discredit and to make him out a renegade of a relict. He did go through all the accepted motions as a mourner. He took on "something dreadful" at the funeral. He placed in the cemetery lot a granite statue of himself, in a frock coat of stone and holding a stone plug hat in the hook of the elbow. That statue cost Tasper Britt rising sixteen hundred dollars—and after he dyed his beard and bought the top piece of hair, the satirists of Egypt were unkind enough to say that he had set his stone image out in the graveyard to scare Hittie if she tried to arise and spy on his new carryings-on....