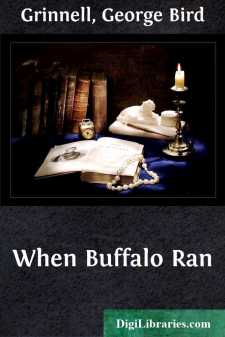 Seventy years ago, when some of the events here recounted took place, Indians were Indians, and the plains were the plains indeed.

Those plains stretched out in limitless rolling swells of prairie until they met the blue sky that on every hand bent down to touch them. In spring brightly green, and spangled with wild flowers, by midsummer this prairie had grown sere and yellow. Clumps of dark green cottonwoods marked the courses of the infrequent streams—for most of the year the only note of color in the landscape, except the brilliant sky. On the wide, level river bottoms, sheltered by the enclosing hills, the Indians pitched their conical skin lodges and lived their simple lives. If the camp were large the lodges stood in a wide circle, but if only a few families were together, they were scattered along the stream.

In the spring and early summer the rivers, swollen by the melting snows, were often deep and rapid, but a little later they shrank to a few narrow trickles running over a bed of sand, and sometimes the water sank wholly out of sight.

The animals of the prairie and the roots and berries that grew in the bottoms and on the uplands gave the people their chief sustenance.

In such surroundings the boy Wikis was born and grew up. The people that he knew well were those of his own camp. Once a year perhaps, for a few weeks, he saw the larger population of a great camp, but for the most part half a dozen families of the tribe, with the buffalo, the deer, the wolves, and the smaller animals and birds, were the companions with whom he lived and from whom he learned life's lessons.

The incidents of this simple story are true.

The life of those days and the teachings received by the boy or the girl who was to take part in it have passed away and will not return.

The Attack on the Camp.

It is the first thing that I can recollect, and comes back to me now dimly—only as a dream. My mother used to tell me of it, and often to laugh at me. She said I was then about five or six years old.

I must have been playing with other little boys near the lodge, and the first thing that I remember is seeing people running to and fro, men jumping on their horses, and women gathering up their children. I remember how the men called to each other, and that some were shouting the war cry; and then that they all rode away in the same direction. My mother rushed out and caught me by the hand, and began to pull me toward the lodge, and then she stopped and in a shrill, sweet voice began to sing; and other women that were running about stopped too, and began to sing songs to encourage their husbands and brothers and sons to fight bravely; for enemies were attacking the camp.

I did not understand it at all, but I was excited and glad to hear the noise, and to see people rushing about. Soon I could hear shooting at a distance. Then presently I saw the men come riding back toward the camp; and saw the enemy following them down toward the lodges, and that there were many of these strangers, while our people were only a few....