What to See in England A Guide to Places of Historic Interest, Natural Beauty or Literary Association 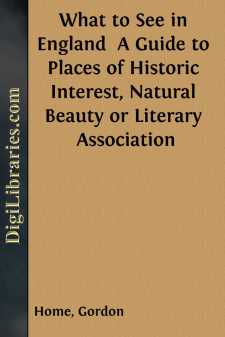 This book is intended to put in the smallest possible space the means by which one may reach the chief places of interest in England and Wales. It will possibly make many holidays, week-ends, or isolated days more enjoyable by placing a defined objective before the rambler. Places within an hour or two of London are in the front of the book, so that as one turns over the pages one is taken further and further afield. The brief summary of the interests of each place, and the many illustrations, may help to memorise the impressions obtained.

The first edition of a book of this nature must of necessity be incomplete, and the author is prepared to hear of long lists of places which should have been included, and also to hear criticisms on his choice of those appearing. It is to some extent natural that special familiarity with certain places and certain writers or heroes of the past may distort one's vision, and perhaps induce a choice of subjects which may not seem so comprehensive to some individuals as to others. Future editions will, however, give ample scope for embracing all the good suggestions which may be made.

The little church at Petersham is interesting on account of the memorial it contains to the memory of Vancouver, the discoverer, in 1792, of the island bearing his name, on the west coast of the North American continent. It is said that "the unceasing exertions which Vancouver himself made to complete the gigantic task of surveying 9000 miles of unknown and intricate coasts—a labour chiefly performed in open boats—made an inroad on his constitution from which he never recovered, and, declining gradually, he died in May 1798." The church is also the burying-place of the Duchess of Lauderdale, whose residence was Ham House. This fine old Jacobean mansion stands at no great distance from Petersham Church. It was built as a residence for Prince Henry, the eldest son of James I., who, however, died early, the gossips of the time hinting at poison. The house is still said to be haunted by the spirit of the old Duchess of Lauderdale, who lived in the time of Charles II.