What to Do? Thoughts Evoked By the Census of Moscow 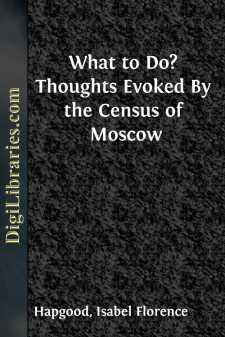 [I saw that money is the cause of suffering and vice among the people, and that, if I desired to help people, the first thing that was required of me was not to create those unfortunates whom I wished to assist.

I came to the conclusion that the man who does not love vice and the suffering of the people should not make use of money, thus presenting an inducement to extortion from the poor, by forcing them to work for him; and that, in order not to make use of the toil of others, he must demand as little from others as possible, and work as much as possible himself.] {22}

By dint of a long course of reasoning, I came to this inevitable conclusion, which was drawn thousands of years ago by the Chinese in the saying, "If there is one idle man, there is another dying with hunger to offset him.

[Then what are we to do? John the Baptist gave the answer to this very question two thousand years ago. And when the people asked him, "What are we to do?" he said, "Let him that hath two garments impart to him that hath none, and let him that hath meat do the same." What is the meaning of giving away one garment out of two, and half of one's food? It means giving to others every superfluity, and thenceforth taking nothing superfluous from people.

This expedient, which furnishes such perfect satisfaction to the moral feelings, kept my eyes fast bound, and binds all our eyes; and we do not see it, but gaze aside.

This is precisely like a personage on the stage, who had entered a long time since, and all the spectators see him, and it is obvious that the actors cannot help seeing him, but the point on the stage lies in the acting characters pretending not to see him, and in suffering from his absence.] {23}

Thus we, in our efforts to recover from our social diseases, search in all quarters, governmental and anti-governmental, and in scientific and in philanthropic superstitions; and we do not see what is perfectly visible to every eye.

For the man who really suffers from the sufferings of the people who surround us, there exists the very plainest, simplest, and easiest means; the only possible one for the cure of the evil about us, and for the acquisition of a consciousness of the legitimacy of his life; the one given by John the Baptist, and confirmed by Christ: not to have more than one garment, and not to have money. And not to have any money, means, not to employ the labor of others, and hence, first of all, to do with our own hands every thing that we can possibly do.

This is so clear and simple! But it is clear and simple when the requirements are simple. I live in the country. I lie on the oven, and I order my debtor, my neighbor, to chop wood and light my fire. It is very clear that I am lazy, and that I tear my neighbor away from his affairs, and I shall feel mortified, and I shall find it tiresome to lie still all the time; and I shall go and split my wood for myself.

But the delusion of slavery of all descriptions lies so far back, so much of artificial exaction has sprung up upon it, so many people, accustomed in different degrees to these habits, are interwoven with each other, enervated people, spoiled for generations, and such complicated delusions and justifications for their luxury and idleness have been devised by people, that it is far from being so easy for a man who stands at the summit of the ladder of idle people to understand his sin, as it is for the peasant who has made his neighbor build his fire....