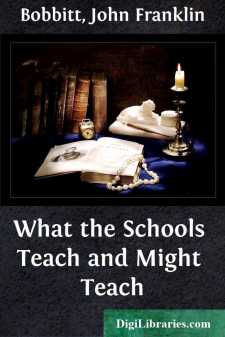 THE POINT OF VIEW

There is an endless, and perhaps worldwide, controversy as to what constitutes the "essentials" of education; and as to the steps to be taken in the teaching of these essentials. The safe plan for constructive workers appears to be to avoid personal educational philosophies and to read all the essentials of education within the needs and processes of the community itself. Since we are using this social point of view in making curriculum suggestions for Cleveland, it seems desirable first to explain just what we mean. Some of the matters set down may appear so obvious as not to require expression. They need, however, to be presented again because of the frequency with which they are lost sight of in actual school practice.

Children and youth are expected as they grow up to take on by easy stages the characteristics of adulthood. At the end of the process it is expected that they will be able to do the things that adults do; to think as they think; to bear adult responsibilities; to be efficient in work; to be thoughtful public-spirited citizens; and the like. The individual who reaches this level of attainment is educated, even though he may never have attended school. The one who falls below this level is not truly educated, even though he may have had a surplus of schooling.

To bring one's nature to full maturity, as represented by the best of the adult community in which one grows up, is true education for life in that community. Anything less than this falls short of its purpose. Anything other than this is education misdirected.

In very early days, when community life was simple, practically all of one's education was obtained through participating in community activities, and without systematic teaching. From that day to this, however, the social world has been growing more complex. Adults have developed kinds of activities so complicated that youth cannot adequately enter into them and learn them without systematic teaching. At first these things were few; with the years they have grown very numerous.

One of the earliest of these too-complicated activities was written language—reading, writing, spelling. These matters became necessities to the adult world; but youth under ordinary circumstances could not participate in them as performed by adults sufficiently to master them. They had to be taught; and the school thereby came into existence. A second thing developed about the same time was the complicated number system used by adults. It was too difficult for youth to master through participation only. It too had to be taught, and it offered a second task for the schools. In the early schools this teaching of the so-called Three R's was all that was needed, because these were the only adult activities that had become so complicated as to require systematized teaching. Other things were still simple enough, so that young people could enter into them sufficiently for all necessary education.

As community vision widened and men's affairs came to extend far beyond the horizon, a need arose for knowledge of the outlying world....