What the Blackbird said A story in four chirps 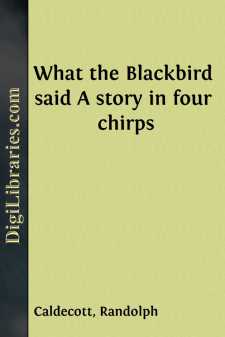 The winter of 1878 was certainly an unusually dreary one, and so thought a remarkably fine young Blackbird, as he perched one morning on the bare bough of a spreading lime-tree, whose last brown leaf had fallen to the ground some weeks before.

With the exception of the Scotch firs and other fortunate evergreens, there was nothing to be seen on all sides but leafless branches standing out sharply against the cold, grey sky. The ground was frozen, and entirely covered with snow, for there had been a heavy fall during the night. The way-marks of field and road were obliterated, all was one sheet of dazzling whiteness. Here and there a little mound marked the spot where a flower-bed lay buried, and there was one narrow path where the snow was thickly piled on either side, for it had been partially swept from the centre, which showed traces of the bright brown gravel below.

The Blackbird was contemplating this landscape in a discontented and unhappy frame of mind. He was, as we have just said, a remarkably fine young bird. His plumage was of a glossy blackness, with which not even a raven’s could vie; his bright eyes looked even brighter as they gleamed from the deep yellow rims which surrounded them, and his bill resembled the polished shaft of an early crocus.

At the time at which my story begins, this Blackbird was about eight months old, and usually he was not a little vain of his appearance. On this particular morning, however, he did not feel at all so proud of himself, or especially pleased with any one or anything. He had passed the long night in a wood hard by, and had been benumbed with cold.

He had tucked his head first under one wing, and then under the other, but it had been of no use, the cutting wind had penetrated even his thick warm feathers, and had ruffled them in a way which had sorely discomposed him, in body as well as in mind.

Then again, all through the night he had been exceedingly put out by little cold wet dabs which kept continually falling on his back. The Blackbird had changed his position––he had done it several times: he had moved from a birch to an elm, and then to a beech-tree. But it was of no avail, the little cold droppings seemed to pursue him wherever he went, and it was not till quite late in the night that he found real shelter, and got a little rest in a thick mantle of ivy which completely covered a wall near the stables.

What were these cold droppings? He could not imagine. He knew well enough they were not rain; rain always made a sharp pelting noise as it struck against the trees. But there had been no such sound, for, with the exception of the occasional sighing of the wind, the night had been a singularly noiseless one. What then could this cold, soft moisture be?

The Blackbird could not at all understand it, but as he was well sheltered, and soon got warm in the ivy, he fell asleep and forgot all about it.

The Blackbird on a small white hillock.

The next morning, however, when he woke up and peeped forth from his green canopy, he was much astonished by the sight which met his eyes....