What Prohibition Has Done to America 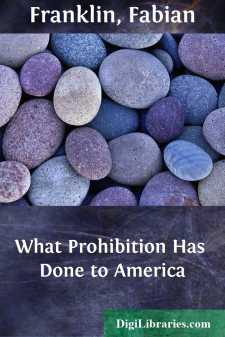 THE object of a Constitution like that of the United States is to establish certain fundamentals of government in such a way that they cannot be altered or destroyed by the mere will of a majority of the people, or by the ordinary processes of legislation. The framers of the Constitution saw the necessity of making a distinction between these fundamentals and the ordinary subjects of law-making, and accordingly they, and the people who gave their approval to the Constitution, deliberately arrogated to themselves the power to shackle future majorities in regard to the essentials of the system of government which they brought into being. They did this with a clear consciousness of the object which they had in view--the stability of the new government and the protection of certain fundamental rights and liberties. But they did not for a moment entertain the idea of imposing upon future generations, through the extraordinary sanctions of the Constitution, their views upon any special subject of ordinary legislation. Such a proceeding would have seemed to them far more monstrous, and far less excusable, than that tyranny of George III and his Parliament which had given rise to the American Revolution.

Until the adoption of the Eighteenth Amendment, the Constitution of the United States retained the character which properly belongs to the organic law of a great Federal Republic. The matters with which it dealt were of three kinds, and three only--the division of powers as between the Federal and the State governments, the structure of the Federal government itself, and the safeguarding of the fundamental rights of American citizens. These were things that it was felt essential to remove from the vicissitudes attendant upon the temper of the majority at given time. There was not to be any doubt from year to year as to the limits of Federal power on the one hand and State power on the other; nor as to the structure of the Federal government and the respective functions of the legislative, executive, and judicial departments of that government; nor as to the preservation of certain fundamental rights pertaining to life, liberty and property.

That these things, once laid down in the organic law of the country, should not be subject to disturbance except by the extraordinary and difficult process of amendment prescribed by the Constitution was the dictate of the highest political wisdom; and it was only because of the manifest wisdom upon which it was based that the Constitution, in spite of many trials and drawbacks, commanded, during nearly a century and a half of momentous history, the respect and devotion of generation after generation of American citizens. Although the Constitution of the United States has been pronounced by an illustrious British statesman the most wonderful work ever struck off at a given time by the brain and purpose of man, it would be not only folly, but superstition, to regard it as perfect. It has been amended in the past, and will need to be amended in the future....