What Philately Teaches A Lecture Delivered before the Section on Philately of the Brooklyn Institute of Arts and Sciences, February 24, 1899 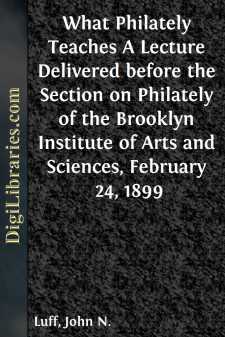 By way of preface, I wish to say, that I have prepared this paper with the hope of interesting those who are not stamp collectors and my endeavor will be to indicate some of the interesting and instructive things that may be learned by those who follow this fascinating pursuit. Much that I have to say will be ancient history to philatelists, but I trust they will remember that this is not especially intended for them and pardon any dryness in it, in view of its intent.

Stamp collecting, as pursued to-day, has become something more than an amusement for children. It affords instruction and mental relaxation to those who are older and more serious.

On the title page of every stamp album and catalogue should be inscribed the old latin motto: "Te doces " thou teachest, for it is certainly an instructor and affords much intellectual entertainment.

In connection with this motto we have a little philatelic joke from the orient. In one of the Chinese treaty ports a stamp has been issued which bears the motto. We find them on the tea chests, written in excellent Chinese, and, even if we do not read the language, we cannot doubt that they refer to the tea doses which the chests contain.

By some, philately has been called a science. Perhaps it hardly merits so exalted a title but it opens for us a wide field for research, in which we may find many curious, interesting and instructive things. It trains our powers of observation, enlarges our perceptions, broadens our views, and adds to our knowledge of history, art, languages, geography, botany, mythology and many kindred branches of learning.

Philately embraces the whole earth and likewise the whole earth is sometimes embraced within the limits of a postage stamp. As an example of this, witness the recent effort of our Canadian cousins in celebration of the achievement of the long-desired ocean penny postage, at present an inter-colonial rate of the British Empire, but some day to be an international rate. The motto is a trifle bombastic and suggests the Teutonic superlative; "So bigger as never vas," and the "Xmas 1898" reads like the advertisement of a department store: "Gents pants for Xmas gifts." But we must admit that the stamp is a pretty conceit, in spite of these defects and of the ambition of the artist, which has spread the "thin red line" over territory that has not otherwise been acquired. In addition to the things to be learned from the pictorial part of stamps, there are other things which attract the attention of the thoughtful and bring with them knowledge that is both interesting and valuable. The mechanical part of stamp making may be studied with much profit and entertainment. Considered in all its aspects, philately is even more instructive than matrimony. You will remember the elder Weller's views on the latter subject: "Ven you're a married man, Samivel, you'll understand a good many things as you don't under stand now; but vether its worth while going through so much to learn so little, as the charity boy said ven he got to the end of the alphabet, is a matter o' taste. I rather think it isn't." This reproach cannot be applied to philately. It teaches even the unwilling and careless. In the effort to fill the spaces in their albums they must learn what varieties they are lacking and in what these differ from other and similar varieties. Thus some knowledge must be gained, even if unsought. To the studious and the careful, in this as in other things in life, the greatest benefits naturally accrue.

In my remarks this evening I shall endeavor to touch upon a few subjects which are quite certain to attract the attention of any one who takes up stamp collecting with any degree of earnestness and thoroughness. That these subjects open up other fields for interesting and profitable study will be readily apparent....