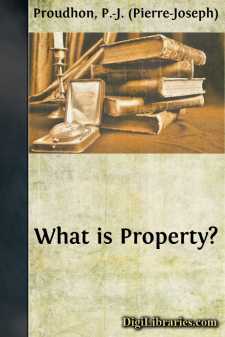 The correspondence of P. J. Proudhon, the first volumes of which we publish to-day, has been collected since his death by the faithful and intelligent labors of his daughter, aided by a few friends. It was incomplete when submitted to Sainte Beuve, but the portion with which the illustrious academician became acquainted was sufficient to allow him to estimate it as a whole with that soundness of judgment which characterized him as a literary critic.

He would, however, caution readers against accepting the biographer's interpretation of the author's views as in any sense authoritative; advising them, rather, to await the publication of the remainder of Proudhon's writings, that they may form an opinion for themselves.—Translator.

In an important work, which his habitual readers certainly have not forgotten, although death did not allow him to finish it, Sainte Beuve thus judges the correspondence of the great publicist:—

"The letters of Proudhon, even outside the circle of his particular friends, will always be of value; we can always learn something from them, and here is the proper place to determine the general character of his correspondence.

"It has always been large, especially since he became so celebrated; and, to tell the truth, I am persuaded that, in the future, the correspondence of Proudhon will be his principal, vital work, and that most of his books will be only accessory to and corroborative of this. At any rate, his books can be well understood only by the aid of his letters and the continual explanations which he makes to those who consult him in their doubt, and request him to define more clearly his position.

"There are, among celebrated people, many methods of correspondence. There are those to whom letter-writing is a bore, and who, assailed with questions and compliments, reply in the greatest haste, solely that the job may be over with, and who return politeness for politeness, mingling it with more or less wit. This kind of correspondence, though coming from celebrated people, is insignificant and unworthy of collection and classification.

"After those who write letters in performance of a disagreeable duty, and almost side by side with them in point of insignificance, I should put those who write in a manner wholly external, wholly superficial, devoted only to flattery, lavishing praise like gold, without counting it; and those also who weigh every word, who reply formally and pompously, with a view to fine phrases and effects. They exchange words only, and choose them solely for their brilliancy and show. You think it is you, individually, to whom they speak; but they are addressing themselves in your person to the four corners of Europe. Such letters are empty, and teach as nothing but theatrical execution and the favorite pose of their writers.

"I will not class among the latter the more prudent and sagacious authors who, when writing to individuals, keep one eye on posterity. We know that many who pursue this method have written long, finished, charming, flattering, and tolerably natural letters. Beranger furnishes us with the best example of this class.

"Proudhon, however, is a man of entirely different nature and habits. In writing, he thinks of nothing but his idea and the person whom he addresses: ad rem et ad hominem. A man of conviction and doctrine, to write does not weary him; to be questioned does not annoy him. When approached, he cares only to know that your motive is not one of futile curiosity, but the love of truth; he assumes you to be serious, he replies, he examines your objections, sometimes verbally, sometimes in writing; for, as he remarks, 'if there be some points which correspondence can never settle, but which can be made clear by conversation in two minutes, at other times just the opposite is the case: an objection clearly stated in writing, a doubt well expressed, which elicits a direct and positive reply, helps things along more than ten hours of oral intercourse!' In writing to you he does not hesitate to treat the subject anew; he unfolds to you the foundation and superstructure of his thought: rarely does he confess himself defeated—it is not his way; he holds to his position, but admits the breaks, the variations, in short, the EVOLUTION of his mind....