What Is Free Trade? An Adaptation of Frederic Bastiat's "Sophismes Econimiques" Designed for the American Reader 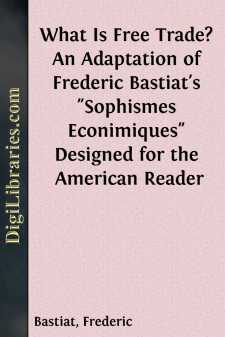 Years ago I could not rid my mind of the notion that Free Trade meant some cunning policy of British statesmen designed to subject the world to British interests. Coming across Bastiat's inimitable Sophismes Economiques I learnt to my surprise that there were Frenchmen also who advocated Free Trade, and deplored the mischiefs of the Protective Policy. This made me examine the subject, and think a good deal upon it; and the result of this thought was the unalterable conviction I now hold—a conviction that harmonizes with every noble belief that our race entertains; with Civil and Religious Freedom for All, regardless of race or color; with the Harmony of God's works; with Peace and Goodwill to all Mankind. That conviction is this: that to make taxation the incident of protection to special interests, and those engaged in them, is robbery to the rest of the community, and subversive of National Morality and National Prosperity. I believe that taxes are necessary for the support of government, I believe they must be raised by levy, I even believe that some customs taxes may be more practicable and economical than some internal taxes; but I am entirely opposed to making anything the object of taxation but the revenue required by government for its economical maintenance.

I do not espouse Free Trade because it is British, as some suppose it to be. Independent of other things, that would rather set me against it than otherwise, because generally those things which best fit European society ill befit our society—the structure of each being so different. Free Trade is no more British than any other kind of freedom: indeed, Great Britain has only followed quite older examples in adopting it, as for instance the republics of Venice and Holland, both of which countries owed their extraordinary prosperity to the fact of their having set the example of relaxing certain absurd though time-honored restrictions on commerce. I espouse Free Trade because it is just, it is unselfish, and it is profitable.

For these reasons have I, a Worker, deeply interested in the welfare of the fellow-workers who are my countrymen, lent to Truth and Justice what little aid I could, by adapting Bastiat's keen and cogent Essay to the wants of readers on this side of the Atlantic.

WHAT IS FREE TRADE? CHAPTER I. PLENTY AND SCARCITY.

Which is better for man and for society—abundance or scarcity?

What! Can such a question be asked? Has it ever been pretended, is it possible to maintain, that scarcity is better than plenty?

Yes: not only has it been maintained, but it is still maintained. Congress says so; many of the newspapers (now happily diminishing in number) say so; a large portion of the public say so; indeed, the scarcity theory is by far the more popular one of the two.

Has not Congress passed laws which prohibit the importation of foreign productions by the maintenance of excessive duties? Does not the Tribune maintain that it is advantageous to limit the supply of iron manufactures and cotton fabrics, by restraining any one from bringing them to market, but the manufacturers in New England and Pennsylvania? Do we not hear it complained every day: Our importations are too large; We are buying too much from abroad? Is there not an Association of Ladies, who, though they have not kept their promise, still, promised each other not to wear any clothing which was manufactured in other countries?

Now tariffs can only raise prices by diminishing the quantity of goods offered for sale. Therefore, statesmen, editors, and the public generally, believe that scarcity is better than abundance.

But why is this; why should men be so blind as to maintain that scarcity is better than plenty...?