What I Saw in California 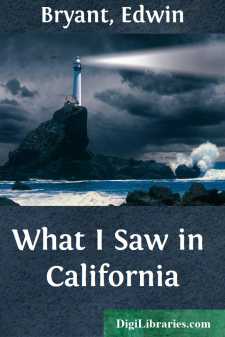 For the general information of the reader, it will be proper to give a brief geographical sketch of California, and some account of its political and social institutions, as they have heretofore existed.

The district of country known geographically as Upper California is bounded on the north by Oregon, the forty-second degree of north latitude being the boundary line between the two territories; on the east by the Rocky Mountains and the Sierra de los Mimbres, a continuation of the same range; on the south by Sonora and Old or Lower California, and on the west by the Pacific Ocean. Its extent from north to south is about 700 miles, and from east to west from 600 to 800 miles, with an area of about 400,000 square miles. A small portion only of this extensive territory is fertile or inhabitable by civilized man, and this portion consists chiefly in the strip of country along the Pacific Ocean, about 700 miles in length, and from 100 to 150 in breadth, bounded on the east by the Sierra Nevada, and on the west by the Pacific. In speaking of Upper California this strip of country is what is generally referred to.

The largest river of Upper California is the Colorado or Red, which has a course of about 1000 miles, and empties into the Gulf of California in latitude about 32 degrees north. But little is known of the region through which this stream flows. The report of trappers, however, is that the river is canoned between high mountains and precipices a large portion of its course, and that its banks and the country generally through which it flows are arid, sandy, and barren. Green and Grand Rivers are its principal upper tributaries, both of which rise in the Rocky Mountains, and within the territories of the United States. The Gila is its lowest and largest branch, emptying into the Colorado, just above its mouth. Sevier and Virgin Rivers are also tributaries of the Colorado. Mary's River rises near latitude 42 degrees north, and has a course of about 400 miles, when its waters sink in the sands of the desert. This river is not laid down on any map which I have seen. The Sacramento and San Joaquin Rivers have each a course of from 300 to 400 miles, the first flowing from the north and the last from the south, and both emptying into the Bay of St. Francisco at the same point. They water the large and fertile valley lying between the Sierra Nevada and the coast range of mountains. I subjoin a description of the valley and river San Joaquin, from the pen of a gentleman (Dr. Marsh) who has explored the river from its source to its mouth.

"This noble valley is the first undoubtedly in California, and one of the most magnificent in the world. It is about 500 miles long, with an-average width of about fifty miles. It is bounded on the east by the great Snowy Mountains, and on the west by the low range, which in many places dwindles into insignificant hills, and has its northern terminus at the Strait of Carquines, on the Bay of San Francisco, and its southern near the Colorado River....