What became of Them? and, The Conceited Little Pig 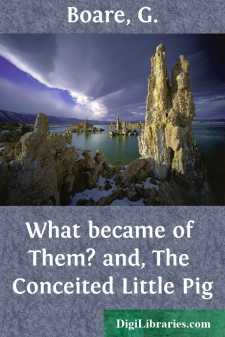 e was a rat, and she was a rat,And down in one hole they did dwell,And both were as black as a witch’s cat,And they loved one another well.           He had a tail, and she had a tail,Both long and curling and fine,And each said “Yours is the finest tailIn the world,—excepting mine!”         e smelt the cheese, and she smelt the cheese,And they both pronounced it good,And both remarked it would greatly addTo the charms of their daily food.

And I saw them go with pain,

But what befell them I never can tell,

For they never came back again.

This poem is reprinted from “St. Nicholas” by kind permission of the Century Company.

There were six little pigs, as I’ve heard people say,

Went out with their mother-pig walking one day,

The sun shone so bright, and the air was so free,

They might all have been happy, as happy could be.

And so they all were, except one little brother,

Who thought he was wiser, poor thing, than his mother,

And was always contriving some nonsense to chatter,

And, when she reproved him, said, “What does it matter?”

“I scarcely need answer” his mother would say,

“You yourself will discover the matter one day.

“Take my word, you’ll repent it, or sooner or later.”

Says he “I repent it! why, what does it matter?”

Just while they were talking, a mastiff passed by,Enjoying the sunshine and pretty blue sky.Said this bad little pig “How I long to displease himI daresay, if I grunt, it will mightily tease him.” His mother replied, “It were better by farTo let him be quiet, and stay where you are,For, if you affront him, he’ll bite you I know.”“What matters it whether he bite me or no?” Said the silly young thing, and he scampered awayAnd grunted at Doggy, but what did Dog say?Why, he turned round, and seizing Pig’s ear with his teethHe tore it, and worried him nearly to death. Then took himself off, and Pig ran away too.And come to his mother to know what to do,Who took no account of his crying and clatter.He said, “Oh my ear!” she said “What does it matter?” “’Tis only the bite that I bade you beware of,Besides, your own ear you can surely take care of!I wonder to hear you consulting another,Especially me, your poor ignorant mother!”   All this time little Piggy was crying and screaming,And over his cheeks the salt tears were streaming,And sadly he grieved as he cast his eyes round,And saw all his brothers with ears safe and sound. You’ll think after this he was prudent and wise,And loved his good mother and took her advice,You’ll think he began his bad ways to forsake,But this, I assure you, is all a mistake. For still he was naughty, as naughty could be:And as often was punished—then, sorry was he;But as soon as he fairly was rid of the pain,He forgot all about it, and did wrong again....
Show more
Show less